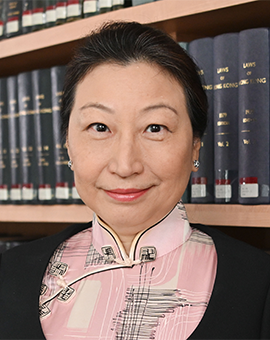 Ms Teresa Cheng, SC, was appointed Secretary for Justice on January 6, 2018. She was a Senior Counsel in private practice before joining the Government. She is also a chartered engineer and chartered arbitrator. She was frequently engaged as arbitrator or counsel in complex international commercial or investment disputes. Ms. Cheng was one of the founders and Chairman of the Asian Academy of International Law. She is a Past Vice President of the International Council of Commercial Arbitration, Past Vice President of the ICC International Court of Arbitration and Past Chairperson of Hong Kong International Arbitration Centre. In 2008, she became the first Asian woman elected through a global election as President of the Chartered Institute of Arbitrators. She served as Deputy Judge / Recorder in the Court of First Instance of the High Court of Hong Kong from 2011 to 2017. She is a member of the International Centre for Settlement of Investment Disputes Panel of Arbitrators, and was a member of the World Bank's Sanctions Board. Ms. Cheng is a Fellow of King's College in London, and was the Course Director of the International Arbitration and Dispute Settlement Course at the Law School of Tsinghua University in Beijing.

The Role of the Secretary for Justice

We have a strong legal fraternity and independent Judiciary in which we all take pride. It is the duty of the Secretary for Justice to ensure effective, efficient and equitable administration of justice to facilitate access to justice and that the independence of our Judiciary, as enshrined in the Basic Law, is respected and not arbitrarily attacked. The Secretary for Justice is also duty bound to act in accordance with the rights and obligations conferred or imposed by the law as a guardian of public interest. It is the Secretary for Justice’s inexorable responsibility to promote and further the rule of law, as well as to strengthen the community’s understanding and practice of the rule of law as a cornerstone of our society. The rule of law must be observed and respected by the community as a whole for inclusive and sustainable development. It is through our daily lives and activities that we become testament to the existence of the rule of law.

Criminal prosecutions free from any interference

Article 63 of the Basic Law guarantees that the Department of Justice shall control criminal prosecutions, free from any interference. Decisions to prosecute or not must be based on an objective and professional assessment of the admissible evidence, applicable law and the Prosecution Code. Politics has no role to play in such decisions. Some decisions are hard to make, but the Department is duty bound to make decisions that are legally correct and free from any interference, difficult or unpalatable though they may be. It is the duty of the Secretary for Justice to ensure that our independent role of conducting criminal prosecutions would be in no way compromised.

Promotion of correct conception towards the Constitution and the Basic Law

As the head of the Department of Justice, it is the duty and responsibility of the Secretary for Justice to provide honest, independent and professional advice to the Government including on the legality of its acts and its compliance with the laws.

The law must be clear, intelligible and accessible. The Department shoulders the responsibility of drafting all legislation proposed by the Government. It is the duty of the Secretary for Justice to ensure that all legislation is in plain language and readily accessible to the public.

Our independent judiciary, strong legal profession, deep-rooted rule of law tradition and outstanding common law system have together formed a solid foundation for Hong Kong’s status as the leading centre for international legal and dispute resolution services in the Asia-Pacific region. Going forward, in collaboration with the relevant stakeholders, the Secretary for Justice will continue to enhance our presence, reputation and influence in the field of legal and dispute resolution services in this region and beyond, strengthening Hong Kong’s position as an ideal deal-making hub and a leading dispute resolution centre.

As Secretary for Justice, I serve with humility, courage and determination without fear or favour.