Legal and arbitration professionals in Hong Kong, with their rich experience in international commercial law and high level of professional expertise, could provide legal and dispute resolution services in various areas to help Mainland enterprises, including enterprises in Fujian and Xiamen, to expand their international market, the Secretary for Justice, Mr Rimsky Yuen, SC, said in Xiamen today (April 27).

Mr Yuen delivered an opening address at the Seminar on Hong Kong Legal and Arbitration Services held in Xiamen this morning. He said that Hong Kong has been a hub for legal and dispute resolution services in the Asia-Pacific region for years. While working to enhance laws, regulations and legal services, Hong Kong also strives to attract suitable international legal organisations and arbitration institutions to set up offices in Hong Kong.

"In September last year, the China International Economic and Trade Arbitration Commission, which we know very well, also established its first arbitration centre outside the Mainland in Hong Kong. This has not only strengthened Hong Kong's leading position as a centre for arbitration in the Asia-Pacific region, but also reinforced Hong Kong's advantage in the handling of Mainland-related arbitration cases.

"Late last year, the world-renowned Hague Conference on Private International Law set up its Asia Pacific Regional Office in Hong Kong. This not only constitutes a vote of confidence in Hong Kong's position as a regional legal services centre, but also enables Hong Kong to play a greater role in the provision of services in the field of private international law," Mr Yuen said.

Noting that Hong Kong's arbitral awards are already enforceable in over 140 jurisdictions under the New York Convention, Mr Yuen said that the Department of Justice will continue to expand this network so that the arbitral awards made in Hong Kong could be enforced in more places.

Mr Yuen hoped that today's seminar would deepen the co-operation in legal and arbitration services between Fujian and Hong Kong and to provide a useful platform for further exchanges. He expressed his gratitude to all participating organisations, including the Department of Justice of Fujian Province, Xiamen Municipal Bureau of Justice and various public institutions, arbitration bodies and legal bodies, for their support.

The seminar, jointly organised by the Hong Kong Special Administrative Region Government, the People's Government of Fujian Province and the Xiamen Municipal Government, carries the theme "Going-out" - legal issues, risk management and dispute resolution. The seminar mainly aims to promote Hong Kong's important role as a legal services and dispute resolution centre in the Asia Pacific Region, and the services and assistance provided by Hong Kong's legal and arbitration professions to Mainland enterprises in their process of "going-out".

The seminar is one of the activities under the Fujian Xiamen Hong Kong Week 2013, which aims to enhance and deepen the co-operation between Fujian Province and Hong Kong in trade and economics, professional services, culture and creative industries.

Mr Yuen met with the Director-General of the Department of Justice of Fujian Province, Mr Chen Yixing, this morning and exchanged views on the development of legal and arbitration services and further enhancement of legal co-operation and liaison in both places. He also visited the Hong Kong exhibitions of Fujian Xiamen Hong Kong Week 2013. 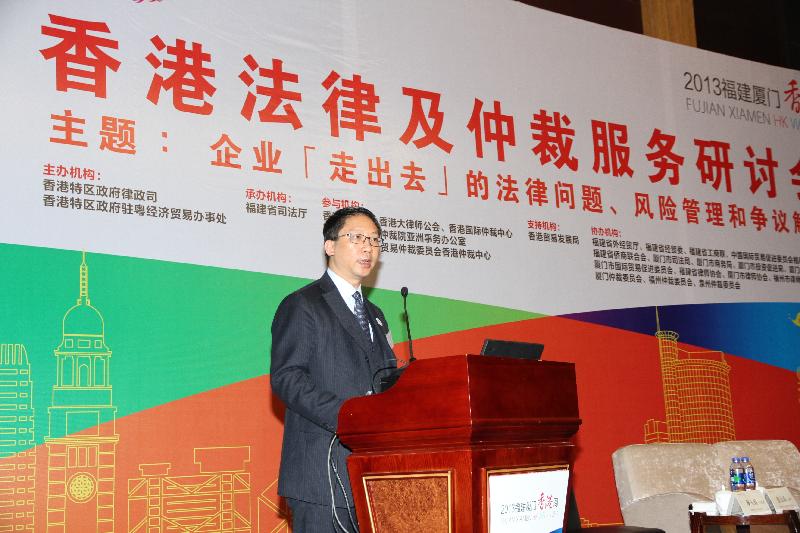