Mr Yuen was delivering an address at the opening ceremony of the Asia Pacific Regional Arbitration Group Conference 2013 held in Beijing.

He pointed out that Hong Kong's convenient location in the Asia-Pacific region and its close proximity to the Mainland also mean that Hong Kong enjoys a distinct advantage in the provision of quality dispute resolution services involving civil and commercial disputes in the region including the Greater China region.

"As an international financial and commercial centre in the Asia-Pacific region, we have been playing an active role in the economic development of the region. We believe that Hong Kong can leverage its advantages to provide high-end and excellent dispute resolution services to address the growing civil and commercial disputes in the region," Mr Yuen said.

He said that the global economic balance has shifted from the West to the East with the Greater China region being the key growth engine in the Asia-Pacific region. With more economic and trade activities, the need for arbitration and ADR services will become higher.

Furthermore, there will be more cross-border or international trade disputes as a result of globalisation and regional integration. Whilst litigation will remain as a traditional form of dispute resolution, international arbitration and other forms of ADR will certainly become more and more popular as they can offer advantages that traditional litigation cannot, he added.

More than 400 government officials and legal and arbitration professionals from the Mainland, Hong Kong and other parts of the world participated in the conference today, which was organised by the China International Economic and Trade Arbitration Commission. Under the theme "International Arbitration in Asia-Pacific Region in the Next Ten Years - Opportunities and Challenges", the participants shared their views and vision on the future of international arbitration in the region in the next decade. 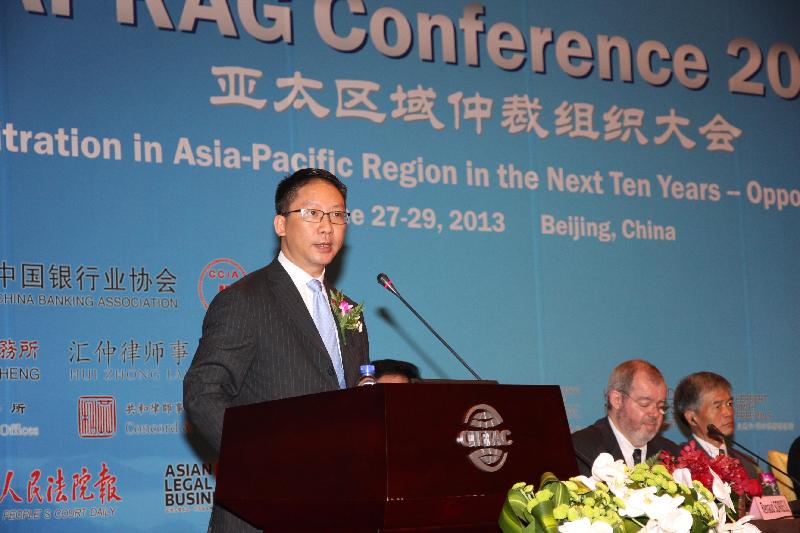