In the afternoon, Mr Li and Mr Zhang proceeded to the Queensway Government Offices to meet the Secretary for Justice, Mr Rimsky Yuen, SC, and other officials of the Department of Justice. Mr Yuen said that during the meeting both sides had good exchanges on the Basic Law and other legal issues, including constitutional reform. Both sides said they hoped that there would be opportunities for more exchanges in the future.

The Chief Executive, Mr C Y Leung, hosted a dinner for Mr Li and Mr Zhang at Government House this evening and thanked them for visiting Hong Kong to exchange views with the HKSAR Government's senior officials, Executive Council Members, Legislative Council (LegCo) Members, department heads and other members of the community.

Mr Leung said, "In order to achieve the target of electing the Chief Executive by universal suffrage in 2017, the HKSAR Government will carry out the consultation on constitutional development in strict accordance with the provisions in the Basic Law and relevant interpretations and decisions of the NPCSC. We will also strive to forge a consensus and secure the endorsement of a constitutional reform package by a two-thirds majority of all LegCo Members."

At the invitation of the Chief Secretary for Administration, Mrs Carrie Lam, Mr Li and Mr Zhang are visiting Hong Kong from November 21 to 23 to exchange views with HKSAR officials and members of the community on issues relating to the Basic Law and the political structure of the HKSAR. 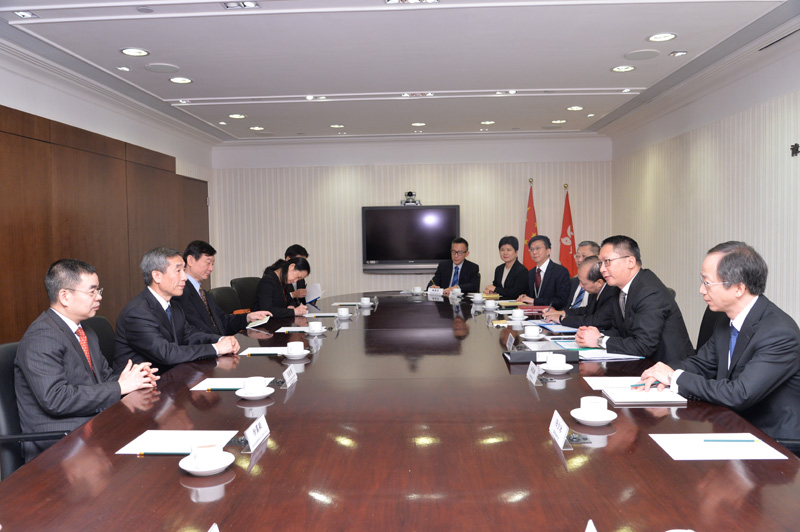