Following is the speech by the Secretary for Justice, Mr Rimsky Yuen, SC, at the opening ceremony of Prosecution Week 2014 today (June 23):

It gives me great pleasure to join you on this happy occasion to witness the official opening of Prosecution Week 2014.

This event, known as "Prosecution Week", first started in 2012. I should take this opportunity to express my gratitude to Mr Justice Zervos, then our Director of Public Prosecutions and now a Judge of the Court of First Instance, as he is the one who came up with this idea and who contributed greatly to the success of the last two Prosecution Weeks held in 2012 and 2013.

As two years have passed since the first Prosecution Week was held, this may be an appropriate occasion to revisit the rationale for organising this event and why we see fit to make it an important annual event in the calendar of the Department of Justice.

It is obvious that the Department of Justice cannot single-handedly maintain an effective and fair criminal justice system. Instead, it has to work closely with the law enforcement agencies and other relevant stakeholders. The public, no doubt, is an important group of stakeholders in this context. As stated in the Introduction to our current Prosecution Code, "The community has a vested interest in the proper conduct of its prosecutions and in furthering the criminal justice imperative that the guilty are convicted and the innocent are acquitted."

It is equally obvious that we need to have public support and confidence before we can properly maintain our criminal justice system. In this context, public confidence and support mean that the public feel assured that our prosecutors are discharging their duties properly, fairly, independently and effectively. One, however, cannot possibly establish public support and confidence unless members of our community understand how the criminal justice system works, what are the roles of our public prosecutors, as well as the fundamental principles pursuant to which our prosecutors operate. With a view to enhancing public understanding, it is important to reach out to the community and to engage the public.

For this reason, the Prosecutions Division has put special emphasis on enhancing the public's understanding of its work. The Director of Public Prosecutions mentioned just now in his speech the new initiative of the "Meet the Community" Programme. Under this programme, our prosecutors visit schools and community institutions to give talks so as to enhance the public's understanding of the criminal justice system and the rule of law. Besides, the Prosecution Code that I mentioned earlier was published in September last year. Not only does the Code provide detailed guidelines to prosecutors, it informs judges, defence lawyers, the accused, victims and the public of the principles we apply in making prosecution decisions as well as in dealing with other aspects of our prosecution works.

Prosecution Week 2014 complements these new initiatives. It aims to promote the public's understanding and appreciation of the work of the Prosecutions Division through various activities in which the public can actively participate, including guided visits, mock courts and a slogan competition, the prize presentation for which will be held towards the later part of this ceremony. With growing community understanding of and support for the prosecution process, I believe our prosecution team can go from strength to strength in bringing the prosecution service even closer to the general public. In this way, it can respond more readily to the community's aspiration for the rule of law and better serve the public.

The theme of this year's Prosecution Week is "Prosecutions: Fearless, Accountable, Impartial and Robust". The theme in Chinese is "秉持公正，彰顯法治", which means "upholding justice and the rule of law". These themes, though expressed in two different languages, complement each other. The message behind the English theme is that our prosecution service is devoted to conducting prosecution without fear or favour, thereby achieving the ultimate goal that the Chinese theme seeks to bring out, namely, to uphold justice and the rule of law.

In this regard, Article 63 of the Basic Law entrenches the conduct of criminal prosecutions independently free from any interference. It is an important principle which we always adhere to when we discharge our duties. In particular, when faced with politically sensitive cases or cases which attract huge media interest, such as cases involving public figures or cases concerning public order events, it is all the more important to strictly adhere to this cardinal principle so that truly independent decisions are made, and that every step taken in the prosecution process is strictly in accordance with the law and the Prosecution Code.

In carrying out this important constitutional duty, the efficient and dedicated prosecution team led by Mr Keith Yeung, SC, our current Director of Public Prosecutions, has spared no effort in handling the full array of criminal cases of different nature and significance. Although we are facing new challenges day after day, I have every confidence that Mr Keith Yeung, SC, and his team will continue to discharge their role properly and professionally in the way as highlighted in the themes of this year's Prosecution Week. I am also confident that with initiatives such as Prosecution Week, the general public will have an even better understanding of, and confidence in, our prosecution work.

Last but not least, I wish to thank the Bar Association and the Law Society for the full and equally important support that they have rendered to Prosecution Week 2014. May I also take this opportunity to express my gratitude to all the colleagues of the Department of Justice, especially those in the Prosecutions Division, who assisted in making arrangements for this year's event. Without their hard work and dedication, the successful organisation of this meaningful event could have not been possible.

With these remarks, I now formally declare the commencement of Prosecution Week 2014. 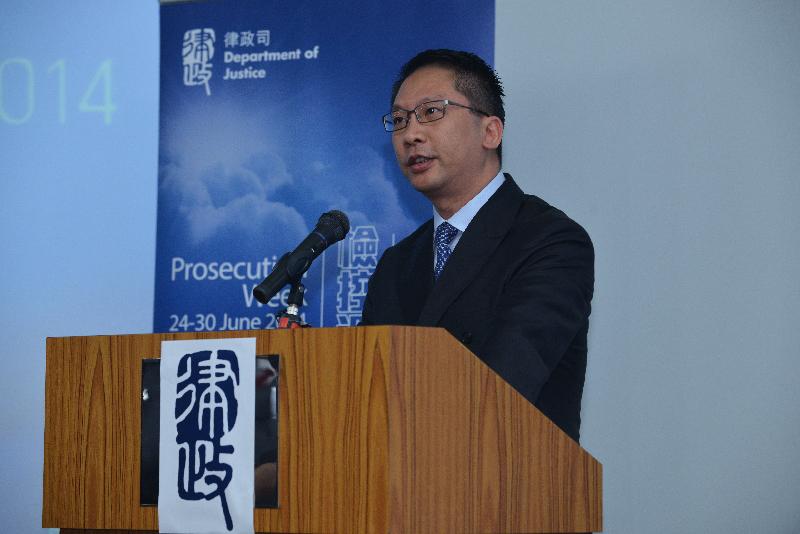