First of all, on behalf of the Law Reform Commission, may I extend our warmest welcome to all of you here.

The idea of organising a law reform essay competition in Hong Kong was first put to us by one of our Executive Council Members, the Honourable Ms Anna Wu. Although Ms Wu cannot join us this evening as she is not in town, I would like to thank her for raising the idea with us and also her subsequent contribution which I will mention later.

When the idea of this competition was discussed at the LRC meeting, LRC members were all very supportive. Eventually, the LRC decided last year to organise, for the first time, an essay competition that provides law students in Hong Kong with an opportunity to propose how a given area of Hong Kong law may be reformed.

As the Chairman of the LRC has said on many occasions, law reform plays an important role in any community which aspires to maintain the rule of law. We live in a fast changing world. Globalisation, advance of technology and other forces make our world changes even faster than before. As our society evolves, our laws have to change so as to meet the needs of our society. Indeed, unless our laws are kept up to date, the risk of injustice and unfairness may emerge.

The LRC believes that this essay competition would, amongst others, assist in raising law students' awareness and interests in law reform, as well as offering them an opportunity to reflect on and suggest proposals on what the law should be on a given topic (in contrast with simply studying what the law is).

The topic chosen for the competition is: "Should pre-nuptial agreements be recognised and enforceable in Hong Kong? If so, how?". Winners are awarded with a one-month attachment with leading law firms and the Department of Justice. I would like to express our gratitude to the four sponsoring law firms for their support in offering an internship to the finalists. Their support is instrumental in making this competition a success. These four law firms are Baker & McKenzie, ONC Lawyers, Wilkinson & Grist and Woo Kwan Lee & Lo. In this regard, I should also thank Ms Anna Wu, Ms Angela Lee and Mr Ludwig Ng as they played an important role in assisting us to obtain sponsorship from the four law firms. I am very happy that representatives from these law firms can join us this evening. In addition, Mr Ludwig Ng from ONC Lawyers, a strong supporter of law reform, will also share with us his thoughts on the competition in a moment.

In this competition, 41 essays were received. Thirteen essays were shortlisted for the second marking and the five finalists were eventually chosen after very careful assessment by our Adjudicating Panel comprising Mr John Budge (who is the Chairman of the Panel), Professor Lin Feng, Mr Peter Rhodes, Mr Paul Wan (the Law Draftsman of the Department of Justice) and Professor Michael Wilkinson. We are most grateful to the members of the Panel for their time and effort in considering and assessing the essays.

As regards the five finalists, I would like to congratulate them for their well-argued and thoroughly researched essays. LRC members unanimously consider that the five essays are of a very high standard both in terms of substance and presentation. I have no doubt that they must have spent a lot of time and effort before they could come up with such excellent essays. Should you like to read the essays, they are available on the LRC's website.

Lastly, I would like to do a bit of marketing. Encouraged by the result of this first essay competition, the LRC has decided to make this law reform essay competition an annual event. Details of the second competition will be announced in due course and I hope the LRC can continue to count on your support in the years to come.

On this note, may I wish the finalists every success in their studies and future career in the legal profession. Thank you and I wish you all an enjoyable evening. 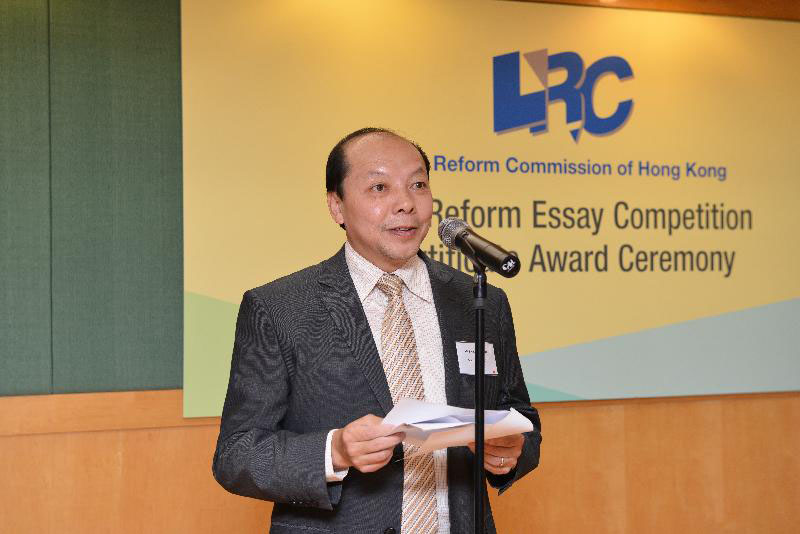