SG's speech at seminar on "Hong Kong - An International Hub for Legal & Arbitration Services" in Yangon, Myanmar (English only) (with photo)

Following is a speech delivered by the Solicitor General, Mr Frank Poon, at the seminar on "Hong Kong - An International Hub for Legal & Arbitration Services" in Yangon, Myanmar, today (August 29):

I am very grateful for this opportunity to address this distinguished audience comprising business and professional leaders. Myanmar and Hong Kong are closely connected in many areas, including trade and commerce. Geographically, both Myanmar and Hong Kong are located at the heart of the Asia-Pacific region. In fact, it only took me around three hours to fly from Hong Kong to Yangon and with the launch of direct flights between Hong Kong and Yangon, people-to-people exchanges between the two cities are bound to increase. Economically, Hong Kong and Myanmar are good partners. Hong Kong is the third largest source of foreign direct investment in Myanmar. In 2013, Hong Kong's exports to Myanmar grew by 32 per cent to US$111 million, driven by the growth in re-export.

As a lawyer, my focus on the ties between the two economies is naturally law-related. Given that Hong Kong is an international financial and commercial centre, we have chosen the topic "Hong Kong - An International Hub for Legal & Arbitration Services" as the theme of the seminar today.

The confidence in Hong Kong's investment and business environment has been strong since our reunification with Mainland China in 1997. A quick look at some of the leading international ratings will demonstrate this proposition. In the 2014 Index of Economic Freedom jointly released by the Heritage Foundation and the Wall Street Journal, Hong Kong ranked first for the 20th consecutive year. The latest Global Financial Centre Index published by the Z/Yen Group based in London lists Hong Kong as the third global financial centre, after New York and London.

The Rule of Law: Cornerstone of Hong Kong's Success

Behind Hong Kong's success as a leading global financial and commercial centre lie many factors. I would say that the rule of law enshrined in our legal system is undoubtedly the cornerstone of our success. The rule of law provides a secure and predictable environment for individuals and organisations so that they know what their rights and obligations are. It also ensures a level playing field for all businesses. International businesses are attracted to Hong Kong because they can rest assured that their investments and interests are protected by a good legal system and impartial courts. As emphasised by the Chief Executive of Hong Kong in his 2014 Policy Address, "The rule of law is vital for safeguarding our rights and freedoms. It is also the cornerstone for maintaining Hong Kong's status as an international financial and commercial centre."

Judicial independence is critical to the rule of law. We have a Judiciary known for its quality and independence. Judicial independence is in fact guaranteed on a constitutional level in Hong Kong. Our Basic Law, which is Hong Kong's mini-constitution, provides that "The courts of the Hong Kong Special Administrative Region shall exercise judicial power independently, free from any interference". It also uniquely provides that judges from other common law jurisdictions may be invited to sit on the Hong Kong Court of Final Appeal. This means that the Court of Final Appeal is served not only by top judges from within Hong Kong but also world-class jurists from other jurisdictions including serving Supreme Court judges from the United Kingdom and retired chief justices from Australia.

According to the World Economic Forum Global Competitiveness Report 2013-2014, insofar as judicial independence is concerned, Hong Kong ranked fourth out of 148 countries and was amongst the best in Asia, and indeed the best out of all the jurisdictions that it surveyed in Northeast and Southeast Asia.

Capitalising on our well-developed legal system and legal infrastructure, it is the policy of the Hong Kong Government, as well as the key priority of the Department of Justice, to enhance and promote Hong Kong as a centre for international legal and dispute resolution services in the Asia-Pacific region.

Our decision to formulate such a policy is also based on a number of important considerations.

First, the economic trend is obvious. The global economic balance has shifted from the West to the East with the Greater China region as well as the emerging economies in Southeast Asia being the key growth areas. The more economic and trade activities, the greater the need for legal and dispute resolution services to cope with commercial transactions and disputes that may arise from these activities. Thus, we expect significant growth in international commercial arbitration and international investment arbitration in the Asia-Pacific region in the coming years.

Second, Hong Kong is a well-established international financial and commercial centre. The promotion of Hong Kong as a centre for international legal and dispute resolution services in the Asia-Pacific region serves to complement Hong Kong's position as a global finance centre. The availability of lawyers and other professionals with rich experience in complex international transactions provides the necessary support to the international business community, whether in terms of pre-transaction advice, preparation of transaction documentation, tax planning or corporate restructuring.

Commercial disputes arise inevitably from business transactions, and business leaders often prefer to resolve their disputes by sensible and practical means. Accordingly, the Hong Kong Government has every reason to support Hong Kong's development as a regional dispute resolution centre.

The Role of Hong Kong for Myanmar

So what may Hong Kong offer to Myanmar in terms of dispute resolution and legal services? Given its close proximity to Myanmar and the availability of seasoned legal professionals, Hong Kong is an ideal place to conduct international commercial transactions. It is also a preferred venue for arbitration of commercial disputes for Myanmar businesses, particularly disputes with foreign and Chinese companies.

In this regard, I wish to outline the key aspects of Hong Kong's advantages in this area.

First and foremost, Hong Kong has strong legal infrastructure. Whilst a part of the People's Republic of China, Hong Kong is unique in the world because of the "One Country, Two Systems" policy which has been in operation since 1997. Hong Kong is a separate legal jurisdiction from Mainland China and is indeed the only common law jurisdiction in the Greater China region.

In relation to commercial dispute resolution, our courts adopt an arbitration-friendly approach. Where parties have agreed to settle their disputes through arbitration, our courts will stay the court proceedings in favour of arbitration and will respect the wide discretion of arbitrators and the flexibility of the arbitral process.

In this regard, I must emphasise that Hong Kong cannot attain and maintain its status as a leading centre of international legal and arbitration services without its highly qualified legal professionals.

You may also wish to know that in Hong Kong, parties in arbitration may retain advisers without restrictions as to their nationalities and professional qualifications. In other words, Myanmar companies and lawyers may team up with Hong Kong lawyers for arbitral proceedings conducted in Hong Kong.

Other than helping their clients to resolve commercial disputes, many lawyers in Hong Kong are also experienced in advising on the legal issues and risk management relating to cross-border and international business, e.g. the protection of intellectual property rights in international business transactions. In fact, this is one of the topics for the seminar today, and I hope you will find the information useful to your business.

In addition, Hong Kong's role as an ideal neutral place for international commercial arbitration may be attributed to our user-friendly legislative framework. Our current arbitration law, known as the Arbitration Ordinance (Cap 609), came into effect in 2011. It is based on the latest version of the UNCITRAL Model Law on International Commercial Arbitration, which is well understood by the international arbitration community.

That said, our Arbitration Ordinance is updated from time to time to reflect the most recent developments in the international arbitration scene. For example, in July 2013, legislative amendments were enacted to make it clear that emergency relief granted by an emergency arbitrator, before the establishment of an arbitral tribunal, in or outside Hong Kong is enforceable in accordance with the provisions of the Arbitration Ordinance.

Enforcement of Awards Made in Hong Kong

A Diverse Pool of International Arbitrators

In Hong Kong, other than lawyers, many professionals in other disciplines, such as accountants, bankers, engineers, architects and surveyors, also serve as arbitrators or take on other roles such as counsel for parties or expert witnesses in arbitration proceedings. Arbitrators on the Hong Kong International Arbitration Centre's Panel or List of arbitrators are of different nationalities and they received their professional training from many different jurisdictions around the world.

But I must say that user-friendly legislation and a large pool of highly qualified professionals alone are not enough to create an ideal place for conducting arbitration. These advantages could be better realised when combined with effective administrative support. In this regard, Hong Kong is privileged in that its arbitration services are often supported by well-known arbitration institutions that are housed in excellent facilities.

A very recent development is the plan of the China Maritime Arbitration Commission (CMAC) to set up a branch in Hong Kong. Being a key maritime arbitration institution in Mainland China, the CMAC's presence in Hong Kong would further enhance Hong Kong's role in the resolution of maritime disputes, and reinforce our position as a leading international arbitration centre in the Asia-Pacific.

Looking ahead, we will continue to encourage reputable international legal and dispute resolution institutions to come to Hong Kong.

Finally, Hong Kong is strategically positioned as the gateway to Mainland China. I have mentioned previously the unique position of Hong Kong as a separate common law jurisdiction from Mainland China. To foster closer legal co-operation with the Mainland, we concluded with the Mainland in 2006 an arrangement to facilitate mutual enforcement of court judgments concerning certain commercial disputes. Under the Arrangement, which took effect in August 2008, where a court of either the Mainland or Hong Kong exercising its jurisdiction pursuant to an exclusive choice of court agreement between the parties has made a money judgment, the judgment creditor may apply to a Mainland court or a Hong Kong court for recognition and enforcement of the judgment.

Ladies and gentlemen, as an international city, Hong Kong has an important role to play in facilitating international trade and commercial activities in the region. The Hong Kong Government fully appreciates the importance of the rule of law, our legal system, as well as our legal and arbitration professionals in maintaining Hong Kong's position as a centre for international finance and commerce.

Hong Kong values our close relationship with Myanmar. We look forward to strengthening our trade and commercial ties with Myanmar, including legal co-operation in civil and commercial matters. I have high hope that our legal and arbitration bodies may build on their existing ties and make further efforts to enhance co-operation and share their professional experience in matters such as promotion of legal services and arbitration. I am confident that the business communities of both Myanmar and Hong Kong would benefit from such joint efforts.

On that note, I wish that all of you may benefit from the remaining sessions of this seminar. Thank you. 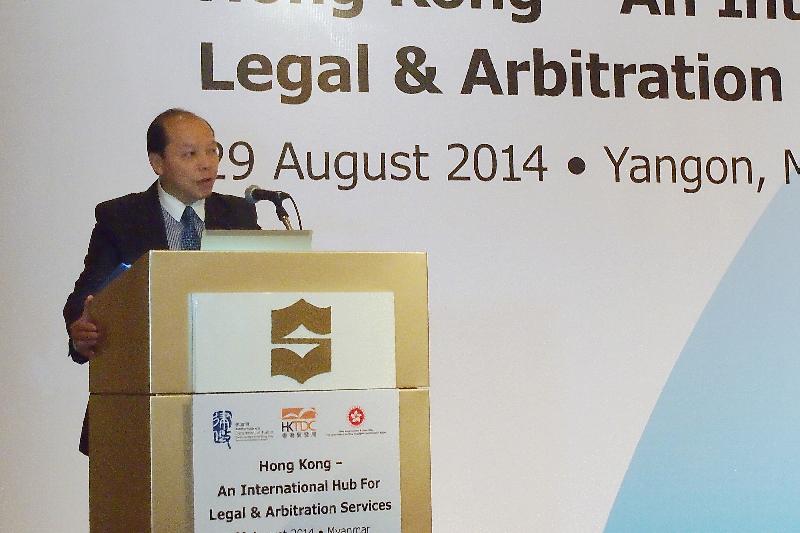