Following is a speech delivered by the Secretary for Justice, Mr Rimsky Yuen, SC, at the "Towards the Well-Being of the Child through the Hague Child Abduction and Protection of Children Conventions: An Asia Pacific Symposium" in Macau today (June 25)

This symposium bears an exceptional significance as it is the very first symposium held in the Asia-Pacific region for the purpose of examining the 1980 Hague Child Abduction Convention and the 1996 Hague Protection of Children Convention from the judicial perspective and the perspective of Central Authorities. Your participation highlights the importance of the key question posed by this symposium, namely how the 1980 and the 1996 Hague Conventions can contribute towards the well-being of children in this region and beyond.

Admittedly, cross-border parental child abduction is not uncommon in the Asia-Pacific region. The growth in transnational marriages, the upsurge of divorce and separation, changes in social values, as well as enhanced mobility of people are some of the reasons giving rise to this phenomenon. Whilst it is important to understand the underlying causes, it is perhaps even more important to protect those who require and deserve protection, namely, the children who are the subject of parental abduction cases. As we all agree, the interests of children are of paramount importance in matters relating to their custody.

It is in this spirit that the 1980 Hague Convention on the Civil Aspect of International Child Abduction (the 1980 Convention) provides a ready answer by establishing an effective system of co-operation among Central Authorities and an efficient procedure for the prompt return of the children to their place of habitual residence. It is indeed one of the most popular Hague Conventions with over 90 contracting states, including a number of jurisdictions in the region. Its importance and value have also been endorsed by the United Nations Committee on the Rights of the Child, which recommended states to become party to the 1980 Convention as a means to implement Article 11 of the United Nations Convention on the Rights of the Child requiring state parties to take measures to combat the illicit transfer and non-return of children abroad.

The 1980 Convention has been applied to Hong Kong since 1997. We can testify that it has been one of the most useful international family law instruments which helps to resolve parental child abduction cases in a robust manner and at the same time serves as an effective deterrent in many potential cases. I am confident that this view is shared by other jurisdictions in the region implementing the Convention and you will hear more from them during the experience sharing sessions.

In addition, the 1980 Convention encourages voluntary return of the abducted children, and mediation can have a significant role to play in the process. Not only can mediation save time and costs, it is a flexible process which can effectively resolve disputes in an amicable and constructive manner. Most importantly, it is far less adversarial than litigation and thus stands a better chance in maintaining or restoring the parties' relationship. Such a means of resolving disputes is particularly useful in family disputes, including in parental child abduction cases. In this regard, if I may be permitted to add that Hong Kong has been promoting mediation as a means of dispute resolution in various areas including child custody disputes, and that we would be more than happy to share our experience.

I would like to take this opportunity to extend our congratulations to the Asia Pacific Regional Office for its continuous efforts in advancing the well-being of children through promotion of the Hague Conventions in the area of international family law since its official opening in Hong Kong in 2012.

The Asia Pacific Regional Office has organised a number of international events in the region which have helped to raise awareness of the significance and value of the relevant Hague Conventions. One example is the conference held in Beijing in May last year focusing on the 1980 Convention, which was very well attended. Not only is this symposium a good follow-up event for that conference, it is also the second international family law event that the Asia Pacific Regional Office has organised in Macau. The first one was a workshop in March 2013 focusing on the 1993 Hague Inter-country Adoption Convention, which is yet another important international family law instrument for enhancing the well-being of children.

Looking prospectively, this symposium marks the beginning of a series of events to be organised by the Asia Pacific Regional Office this year in relation to advancing the well-being of children through Hague Conventions. The Asia Pacific Regional Office will organise a large-scale international conference on the 2007 Hague Child Support Convention in Hong Kong in November this year. A meeting for the International Hague Network of Judges in Hong Kong is also planned at around the same time. I would very much like to welcome you back to this region in November to take part in these events.

Ladies and gentlemen, we are most grateful for having the opportunity to co-organise this symposium. The well-being of children has been a key concern under both the 1980 and 1996 Conventions, and is definitely a topic that no jurisdiction can ignore. As the old saying goes, "children are our future". Hence, looking after the well-being of children is looking after our future.

On this note, it remains for me to wish this symposium every success. For those who come from overseas jurisdictions, I wish you a pleasant stay here in Macau. In case you have time, I would also urge you to spend a few days in Hong Kong to experience the cosmopolitan and vibrant nature of Hong Kong. 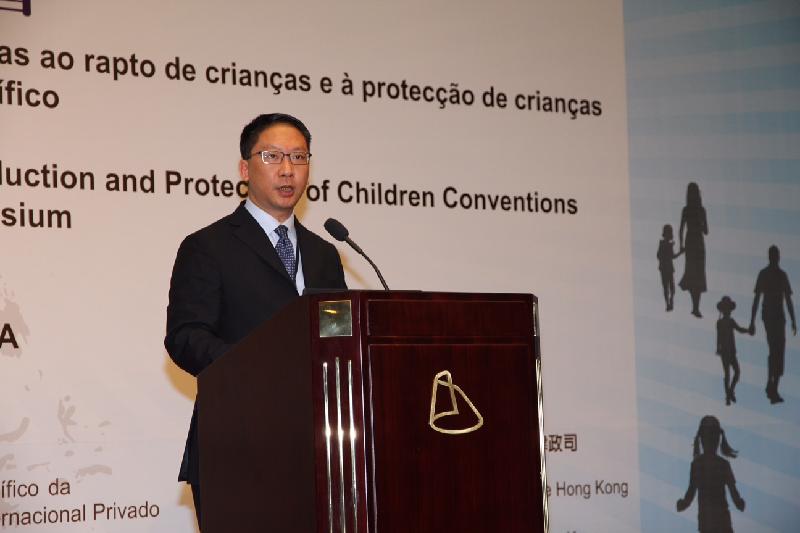