The Secretary for Justice, Mr Rimsky Yuen, SC, delivered a speech at the seminar's opening ceremony. He said that there was plenty of room for co-operation between the Mainland and the HKSAR in the areas of legal and dispute resolution services.

He noted that the relations between Hong Kong and Beijing, including trade and investment relations, have been very close. Hong Kong is Beijing's largest source of foreign investment. Moreover, as an international financial centre, many Beijing enterprises opted for Hong Kong as their investment base.

"The number of Mainland enterprises opting to 'go global' and foreign enterprises making investments in the Mainland will be on the rise as a result of the Belt and Road vision and the establishment of the Asian Infrastructure Investment Bank," he said.

He also said that apart from arbitration, Hong Kong is committed to promoting mediation services. Resolving disputes by mediation is economical and allows more flexibility in reaching settlement agreements that will satisfy all parties when compared to litigation. It can also reduce the negative impact of disputes on the relationship of both sides.

The "Seminar on the Legal and Dispute Resolution Services in Hong Kong" is jointly organised by the Beijing Office of the HKSAR Government, the Department of Justice, the Ministry of Justice and the China Council for the Promotion of International Trade (CCPIT). Co-organisers include Invest Hong Kong of the HKSAR Government, the Hong Kong Trade Development Council, the Hong Kong Chamber of Commerce in China, the China International Economic and Trade Arbitration Commission, the Beijing Investment Promotion Bureau and the Beijing Chinese Overseas Friendship Association.

Also attending today's seminar were the Director of the Beijing Office, Ms Gracie Foo, and the Vice-Chairman of the CCPIT, Mr Yin Zonghua. 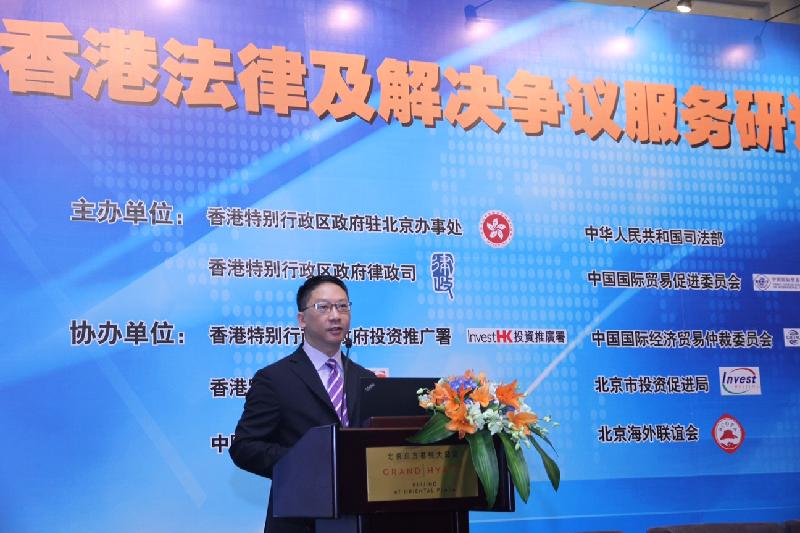