The Basic Law is the single most important legal and constitutional document which underpins the implementation of the "one country, two systems" in the Hong Kong Special Administrative Region, the Secretary for Justice, Mr Rimsky Yuen, SC, said today (October 29, Eastern Standard Time) in New York.

Speaking at the Weatherhead East Asian Institute of Columbia University on the first day of his visit to the United States (US), Mr Yuen said notwithstanding the debates and controversies that we have experienced, the design and operation of the Basic Law as well as the implementation of the "one country, two systems" in the Hong Kong Special Administrative Region have proved to be a success and have been so regarded by the international community.

He said among others, continuity, constitutional guarantee and a solid foundation for further development are the key effects of the Basic Law.

Mr Yuen also briefed some 50 participants from the legal and business sectors on Hong Kong's unique advantages in providing legal and dispute resolution services in Asia-Pacific region at a reception jointly hosted by the New York International Arbitration Center and Hong Kong Association of New York.

The Secretary took the opportunity to call on the acting Chinese Consul General in New York, Mr Cheng Lei.

Mr Yuen will continue his visit to New York tomorrow (October 30, Eastern Standard Time). He will meet with the National Committee on US-China Relations to update its members the latest development of the "one country, two systems" in Hong Kong. He will then speak at a luncheon organised by the American Foreign Law Association on the Basic Law and the rule of law in Hong Kong.

Mr Yuen will go to Washington, DC, on October 31 (Eastern Standard Time) to continue his visit to the US to promote Hong Kong as an international legal and dispute resolution services centre in Asia-Pacific region and update the local community on Hong Kong's latest development. 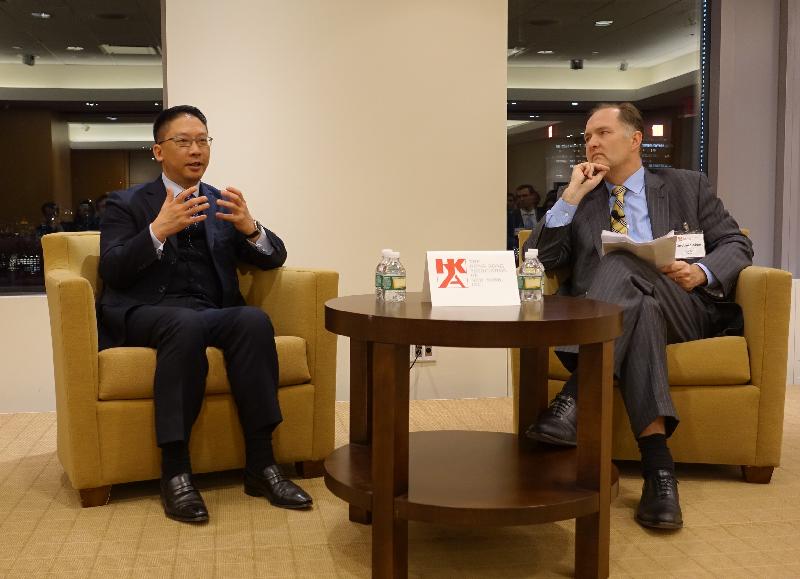