Secretary for Justice starts visit to Washington, DC (with photos)

The Secretary for Justice, Mr Rimsky Yuen, SC, said today (November 2, Eastern Standard Time) in Washington, DC, that it is a long-term policy of the Hong Kong Special Administrative Region (HKSAR) Government to enhance Hong Kong's position as a leading centre for dispute resolution in the Asia-Pacific region.

Speaking at the Georgetown University Law Center, Mr Yuen said that considering the economic development in the Asia-Pacific region and also taking into account the impact of the "Belt and Road" initiative, there will no doubt be an increasing need for international legal and dispute resolution services.

In meeting such an increasing need, Mr Yuen said Hong Kong will enhance and consolidate its role as an international legal and dispute resolution services centre in the Asia-Pacific region.

He said, "Pursuant to the principle of 'one country, two systems' enshrined in the Basic Law, the HKSAR continues its common law system and remains the only jurisdiction in China that adopts the common law system which is familiar to the international business community.

"We also focus on the provision of an arbitration-friendly legislative and enforcement regime, and back it up with the support of both local and international arbitration institutions.

"Our efforts have received international recognition. For instance, in the 2015 International Arbitration Survey released by Queen Mary University of London, the HKSAR is ranked the third most preferred seat worldwide, behind London and Paris," Mr Yuen said.

Mr Yuen today continued his visit to Washington, DC. Apart from addressing the Georgetown University Law Center, he also delivered a keynote speech at a Hague Conventions conference to share Hong Kong's experience in private international law with reference to the Hague Service Convention and the Hague Evidence Convention.

Mr Yuen also took the opportunity to call on the Minister of the Chinese Embassy in the US, Mr Li Kexin. 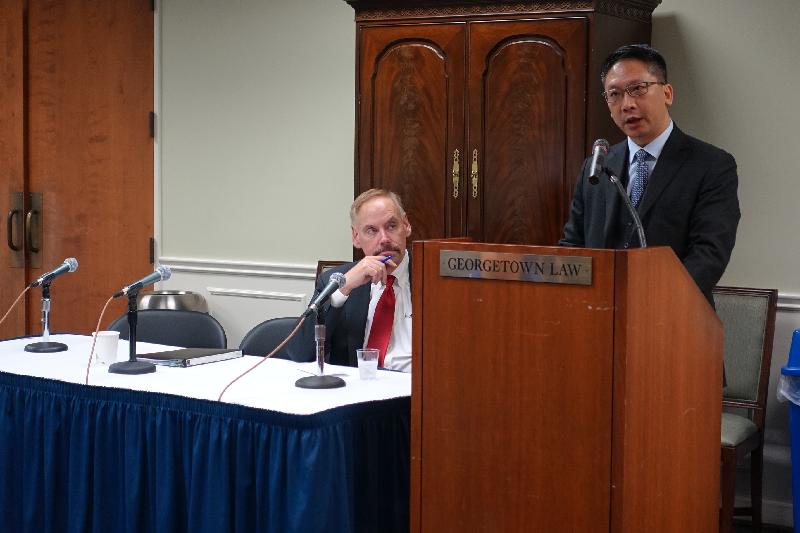