The Secretary for Justice, Mr Rimsky Yuen, SC, said today (December 9) that with its dual advantages under the principle of "one country, two systems", Hong Kong can act as a neutral venue for providing cross-boundary dispute resolution services when Mainland and foreign enterprises are in dispute. By doing so, Hong Kong can reinforce its important status as the legal services and dispute resolution centre in the Asia-Pacific region.

Speaking at the inauguration ceremony of the China Council for the Promotion of International Trade (CCPIT) - Hong Kong Mediation Centre (HKMC) Joint Mediation Center today, Mr Yuen said that China is actively taking forward various development initiatives and plans, including the "Belt and Road" initiative, the soon-to-be-established Asian Infrastructure Investment Bank, the Regional Comprehensive Economic Partnership and the National 13th Five-Year Plan. It is believed that these plans would lead to further increases in cross-boundary trade and other areas of co-operation.

"Cases involving Mainland enterprises 'going global' and foreign enterprises making investments in the Mainland will be on the rise. With commercial disputes that are expected to follow, there will be an increasing demand for legal and dispute resolution services by these enterprises," he said.

He pointed out that mediation is not subject to geographical restrictions and can be conducted in both common law and civil law jurisdictions. With these advantages, parties concerned can resolve disputes involving multiple jurisdictions through mediation, without the need to pursue litigation in individual jurisdictions.

"Looking ahead, Hong Kong can enhance its role in dealing with cross-boundary commercial disputes. The CCPIT-HKMC Joint Mediation Center will become a new platform for co-operation in mediation between the Mainland and the Hong Kong Special Administrative Region. We trust that it will further promote mediation services in the two places by providing more diversified services."

Also attending today's inauguration ceremony were the Vice Chairman of the CCPIT and Chairman of the CCPIT/CCOIC Mediation Center, Mr Yin Zonghua; the President of the HKMC, Mr Francis Law; and the Deputy Director of the Hong Kong Basic Law Committee of the National People's Congress Standing Committee and Honorary Advisor of the HKMC, Ms Elsie Leung. 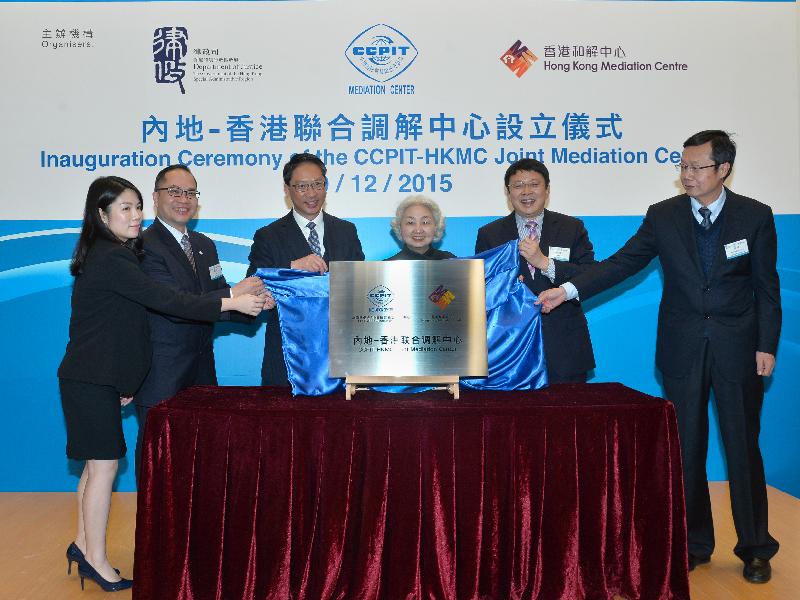