The essay competition was organised by the Law Reform Commission (LRC) for the third time to promote the importance of law reform among law students. It also provides them with an opportunity to propose how a given area of Hong Kong law may be reformed.

The topic of this year's competition was "Should Hong Kong legislate on crowdfunding? If so, how?". The five winners, who are studying law programmes at the Chinese University of Hong Kong, the City University of Hong Kong and Hong Kong Shue Yan University, were awarded a one-month attachment at a leading law firm, a barristers' chambers, a commercial corporation or the Department of Justice this summer.

Officiating at the ceremony, the Secretary for Justice, Mr Rimsky Yuen, SC, who is Chairman of the LRC, said that in Hong Kong there is an on-going discussion about the pros and cons of crowdfunding and the need to set up safeguards against the investment risks which may be involved.

"The topic, in my view, provides us with a good opportunity to consider how our law should be developed so as to meet the challenges brought about by the advance of technology.

"I am very pleased that in this year's competition we received 17 essays," he said, adding that the five winning essays are all of a very high standard, both in terms of substance and organisation.

Mr Yuen pointed out that maintaining the rule of law is more than mere enforcement of the law.

"The contents and substance of the law are no less important. Accordingly, keeping our law up-to-date so as to meet the needs of our society is of vital importance in maintaining the rule of law," he said.

Mr Yuen congratulated the five winners for their well argued and impressively written essays and thanked the sponsoring law firms, barristers' chambers and commercial corporation for their valuable support in offering internships as prizes for the finalists. 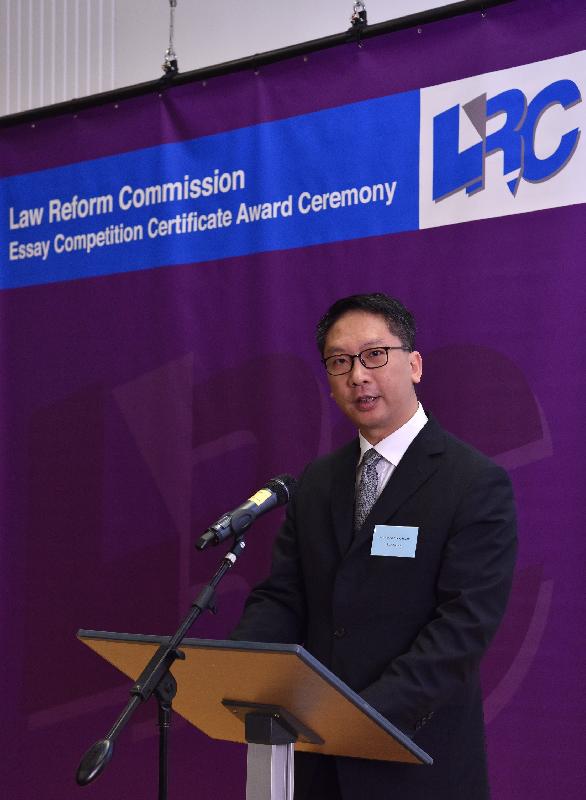