Secretary for Justice starts visit to Melbourne (with photos)

The Secretary for Justice, Mr Rimsky Yuen, SC, said today (August 12) in Melbourne, Australia, that as the only common law jurisdiction in China, Hong Kong is a robust illustration of how we successfully implement the principle of “one country, two systems”.

Delivering a keynote speech at the Business Awards Gala Dinner organised by the Hong Kong Australia Business Association (Victoria Chapter), Mr Yuen said that Hong Kong continues the traditions of the common law and the important notion of the rule of law including an independent judiciary, both of which are the key features constitutionally entrenched in the Basic Law.

“Our Court of Final Appeal (CFA) comprises not only the best judicial talents from within Hong Kong, but also top jurists from other common law jurisdictions including Australia. Indeed, since 1997, seven leading jurists from Australia have been appointed as non-permanent judges on our CFA,” he said.

“The robustness of our legal system, the independence of our judiciary, as well as our strict adherence to the rule of law have provided a solid bedrock for a business environment which is both friendly and effective for businessmen and investors, including our friends from Australia,” he said.

Apart from addressing the Business Awards Gala Dinner, Mr Yuen also spoke at a luncheon event organised by the Law Institute of Victoria on the latest developments of dispute resolution services in Hong Kong earlier today. 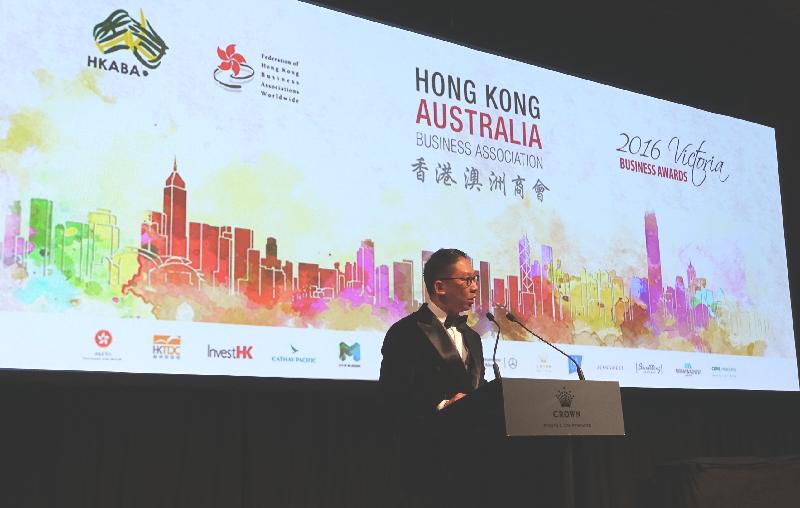