Judicial system should address changes in the world (with photo)

The Secretary for Justice, Mr Rimsky Yuen, SC, said today (September 10) that to ensure that our judicial systems can address changes in the world and that justice has to be effectively administered, judicial reform is an issue which has to be considered and faced by all places. He made these remarks at the closing ceremony of the Chinese Judicial Studies Association Annual Assembly 2016 and Second Summit on Chinese Judicial Studies held in Chongqing.

Under the theme of "Transformation in Justice in a Changing Society", the Second Summit on Chinese Judicial Studies examined topics including the continuation of traditional Chinese legal culture, safeguard of the rule of law under the Belt and Road Initiative, judicial reform and public confidence, as well as modernisation of judicial systems and justice.

"In this era of globalisation, the works concerning judicial reform and the upholding of the rule of law have to address issues faced by the relevant jurisdiction itself, as well as to consider the need to connect with the international community. It should also promote the rule of law and facilitate the regionalisation and globalisation of mutual legal assistance by building bridges with other jurisdictions through various means including those under public international law and private international law," he said.

Mr Yuen will conclude his visit to Chongqing today and return to Hong Kong this evening. 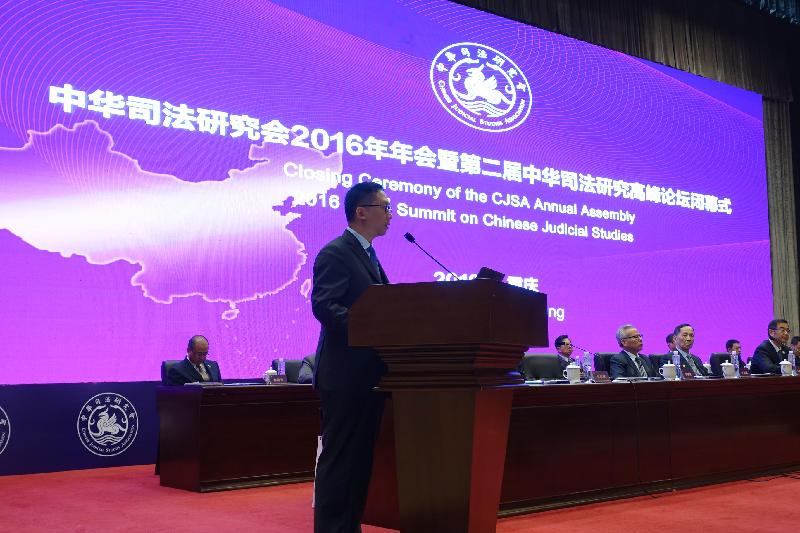