Mr Yuen was speaking at the opening ceremony of the conference co-organised by the Supreme People’s Court and the Department of Justice (DoJ) in Xian. The conference gathered experts in the judicial, legal and arbitration sectors from the two jurisdictions to review the development of mutual legal assistance in civil and commercial matters between the Mainland and the HKSAR and exchange views on the way forward.

Mr Yuen said that Hong Kong continues to adopt the common law system and enjoys independent judicial power and final adjudication power under the principle of "one country, two systems". The common law system helps safeguard the development of the rule of law, economy and other areas in the HKSAR. It also underlines the uniqueness of the “one country, two systems” principle.

“Article 95 of the Basic Law stipulates that the HKSAR ‘may, through consultations and in accordance with law, maintain juridical relations with the judicial organs of other parts of the country, and they may render assistance to each other’. This article provides a solid constitutional basis for mutual legal assistance between the two jurisdictions,” he said.

When reviewing the developments of mutual legal assistance, Mr Yuen pointed out that the two jurisdictions had during the earlier stage achieved three arrangements on civil and commercial matters, namely, on the mutual service of judicial documents, mutual enforcement of arbitral awards and mutual enforcement of judgments in civil and commercial matters by the courts of both sides pursuant to choice of court agreements between parties concerned.

"The three arrangements are working well and play a significant role, especially the arrangement on mutual enforcement of arbitral awards. Not only does it enhance exchanges between the arbitration and legal sectors of the two jurisdictions, the arrangement also helps the HKSAR consolidate its status as an international legal and dispute resolution centre in the Asia-Pacific region," he said.

Mr Yuen pointed out that in order to further advance the implementation of the "one country, two systems" principle, mutual legal assistance in civil and commercial matters should be strengthened.

He said that the Supreme People's Court signed minutes with the DoJ in March last year, in which both sides agreed to actively pursue the work on three aspects, namely the arrangement on mutual taking of evidence in civil and commercial matters, an arrangement on reciprocal recognition and enforcement of judgments on matrimonial and related matters, and an arrangement on reciprocal enforcement of judgments in civil and commercial matters involving situations other than the presence of choice of court agreements. The first arrangement was signed at the end of last year and became effective on March 1 this year. The DoJ will continue to take forward the second and third arrangements.

Mr Yuen will visit court facilities tomorrow (April 24) and return to Hong Kong in the afternoon. 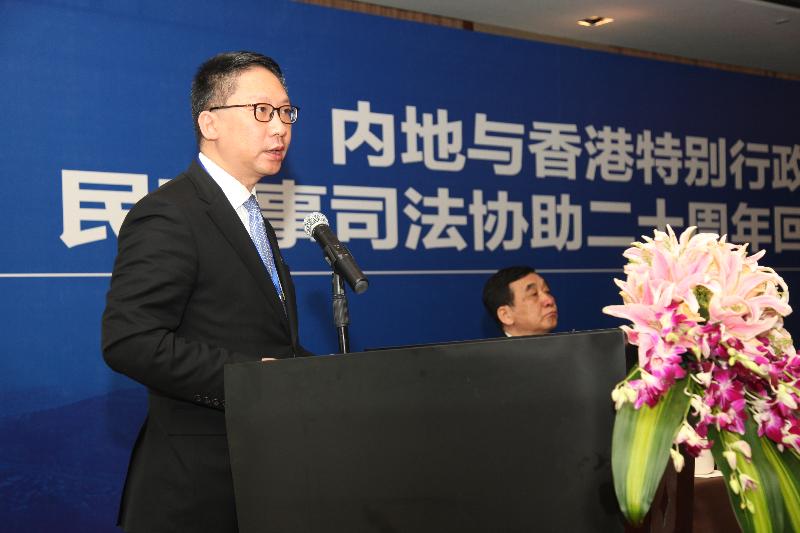