The Secretary for Justice, Mr Rimsky Yuen, SC, and the Executive Vice President of the Supreme People's Court, Mr Shen Deyong, signed an arrangement on reciprocal recognition and enforcement of civil judgments in matrimonial and family cases today (June 20).

Speaking at the signing ceremony, Mr Yuen said that the negotiation and signing of the Arrangement once again demonstrates that the differences between the two places' legal systems are no obstacle to co-operation, if both sides can foster mutual understanding and mutual respect in accordance with the spirit of the "one country, two systems" policy.

"Not only is the signing of the Arrangement today an important milestone in the context of mutual legal assistance between the two places, it is also the most recent example of the successful implementation of the Basic Law," he added.

Mr Yuen said that in view of factors including the rising number of cross-boundary marriages and the increasing proportion of families having assets in both the Mainland and Hong Kong, different sectors in the two places generally agree that there is a pressing need to make an arrangement on reciprocal recognition and enforcement of civil judgments in matrimonial and family cases. This is because such an arrangement can provide clearer legal protection for relevant family members, especially underage children, when problems arise from such marriages, and the parties' legal rights will not be prejudiced by cross-boundary factors or differences between the two legal systems.

He said that despite the significant role played by them, the three arrangements can no longer meet the demands arising from changes in the landscape. The mutual legal assistance between the two places in civil and commercial matters entered a new stage in March last year when the Supreme People's Court signed minutes with the Department of Justice (DoJ) agreeing to actively take forward works on three aspects.

The first aspect is the Arrangement on Mutual Taking of Evidence in Civil and Commercial Matters, which was signed in December last year and which became effective on March 1 this year. The second area is the signing of the Arrangement today.

He added, "On the basis of the good co-operation between the two places, we will start work in respect of the third aspect. In order to expand the scope of recognition and enforcement of judgements on civil and commercial matters, we will study the feasibility of using a framework arrangement to further cover different types of court judgments on civil and commercial matters."

Mr Yuen pointed out that there are differences between the legal and judicial systems of Hong Kong and those of the Mainland, but that does not mean that there cannot be effective mutual legal assistance.

He said, "The reasons are obvious. First, whether before or after China resumed exercise of sovereignty over Hong Kong, Hong Kong has been conducting mutual legal assistance on civil and commercial matters with other jurisdictions pursuant to the laws of Hong Kong, including the Foreign Judgments (Reciprocal Enforcement) Ordinance (Cap 319). In the circumstances, and given that Hong Kong and the Mainland belong to the same country, developing mutual legal assistance between the two places is even more justified.

"Second, since China resumed exercise of sovereignty over Hong Kong, there has been increasing interaction between the Mainland and Hong Kong in contexts such as trade and people's livelihood. Accordingly, there is clearly a need to enhance mutual legal assistance so as to better safeguard the legal rights of parties of the two places.

"Third, not only is Hong Kong an international financial centre, it is also a platform for foreign companies to enter the Mainland market. Put shortly, Hong Kong is a close partner for Mainland enterprises to 'go global' and to 'attract foreign investment'. To maintain this unique role of Hong Kong, it is necessary to ensure effective mutual legal assistance in civil and commercial matters is in place between Hong Kong and the Mainland."

After the signing ceremony, local legislative procedure will be commenced so as to implement the Arrangement. The DoJ will continue to maintain communication with all relevant sectors in the process.

The Chinese version of the Arrangement is now available on the DoJ website. 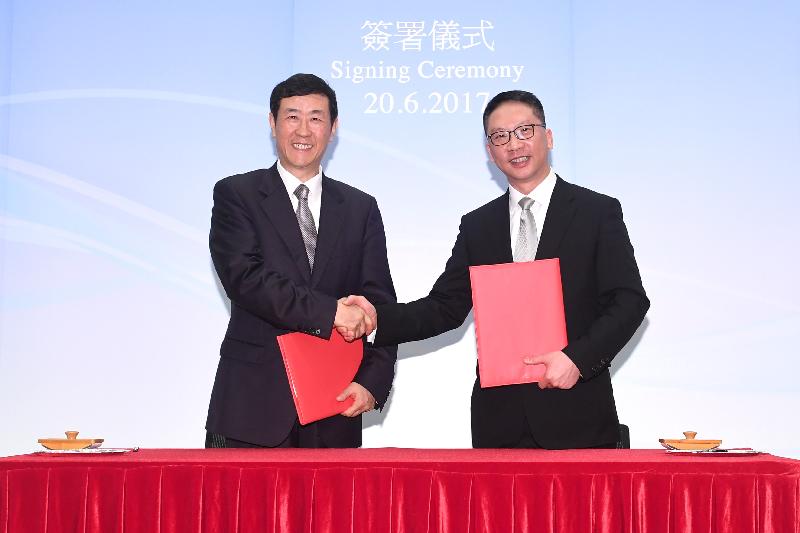