Following is the transcript of remarks from the press conference by the Chief Executive-elect, Mrs Carrie Lam, and the new team of Principal Officials for the fifth term of the Hong Kong Special Administrative Region Government at the Conference Hall, Central Government Offices, Tamar, today (June 21):

Reporter: So, Dr Law is the only one who joined the cabinet from outside the Government. During the time you formed the cabinet, do you feel that Beijing considers loyalty and trustworthiness more important than popularity and capability? And the second question is, the system is supposed to inject new blood into the Government from the outside, so has this system, the political appointment system, failed by now to inject new blood and new thinking into the Administration?

Chief Executive-elect: Well first of all, I think by design the politically accountable system does not necessarily mean that in the change of term we need to find new blood, if you define new blood as unfamiliar faces, or people who have never joined the Government. The political system, by design, is to ensure that each and every of the politically accountable officials will take up political and personal responsibility for the decisions that they take, and for the actions that they implement, during their term of office. And in that respect the 16 politically appointed officials, including myself, will certainly abide by that spirit. We will take responsibility for the decisions that we make and the things that we are going to do in the next term of the HKSAR Government. As you will appreciate, regarding your first question, under the Basic Law, Principal Officials are nominated by the Chief Executive and appointed by the Central People's Government. In this particular case, all the Principal Officials were nominated by me and supported and appointed by the Central People's Government.

Reporter: Mrs Lam, how are you going to bring in a new style of governance if only one person of your cabinet is so-called new blood? And you also said you would like to see more younger members and women joining your cabinet. Do you think you have failed to achieve your goal?

Chief Executive-elect: Well, first of all, I have made it very clear in my election manifesto and to each and every of the Principal Officials that I want to see the next term of the Hong Kong SAR Government adopting a new style of governance and be more proactive in discharging new roles of the Government and in adopting a new fiscal philosophy. I have also given each of them a copy of my manifesto, so they know exactly what I mean when I refer to this new style of governance, new roles and new fiscal philosophy. So I'm very confident that, as a member of this new team, that each and every (one) will put in their best to deliver what I've promised in my manifesto.

As far as the participation of young people, I'm very, very serious about this, but of course you will appreciate that in order to discharge the role of a Principal Official, you do need to have that rich experience, whether in the private sector or in the government sector. So perhaps the Principal Officials that you see today may not look very young, but I can assure you that you will see more young people’s faces in other areas. One is of course in the two other layers, the Under Secretaries as well as the Political Assistants. Secondly is in the revamped Central Policy Unit, which I have promised to recruit 20 to 30 young people, also from different political affiliations, to join the Government on contracts so that they understand more how a government operation is about. And thirdly, I hope that you'll be seeing more young people's faces in the various government boards and committees.

Reporter: A question for Mr Yuen. My question for you is: are you going to step down or leave your post after completing the co-location issue? And the second question is that you said earlier that you have some health problems, health issue that would have prevented you from taking up this post. How about your body now? Is it OK?

Secretary for Justice (designate): Thank you for your question. I think to put the record straight, there have been suggestions in the media that there are health issues about me. But to set the record straight, may I say again, I don't think I have myself said that I have health issues which would prevent me from discharging the duties. Of course everyone, I suppose everyone here, me myself included, would have to, from time to time, perhaps consult the doctor or take some medicine. That is human. But whether or not it would affect my function or my ability to discharge my role as the Secretary for Justice is a totally different question. I would have thought, I guess, you can be the person to make the assessment. My friends can be the persons making the assessment. Up till now, I think I feel perfectly in a position to discharge, as well as to continue to discharge, my role as the Secretary for Justice.

As regards the first part of your question, I think what I can do is to perhaps repeat very briefly what I have said in Chinese earlier when I responded to an earlier question. And the crux of my answer is that time is not the most crucial consideration. From my perspective, what is important is that as long as I remain the Secretary for Justice, I would do my best to discharge my duties and to handle as many things as I would need to handle, including of course the issue of co-location. I fully appreciate that everyone, or at least the majority of people in Hong Kong are concerned with the co-location issue. And that is something which the current term of the Government as well as the next term of the Government would have to deal with great care. As I and my other colleagues have said in the past, we would endeavour to ensure that any co-location plan or arrangement would be consistent with the Basic Law provisions as well as the "one country, two systems" policy. Thank you. 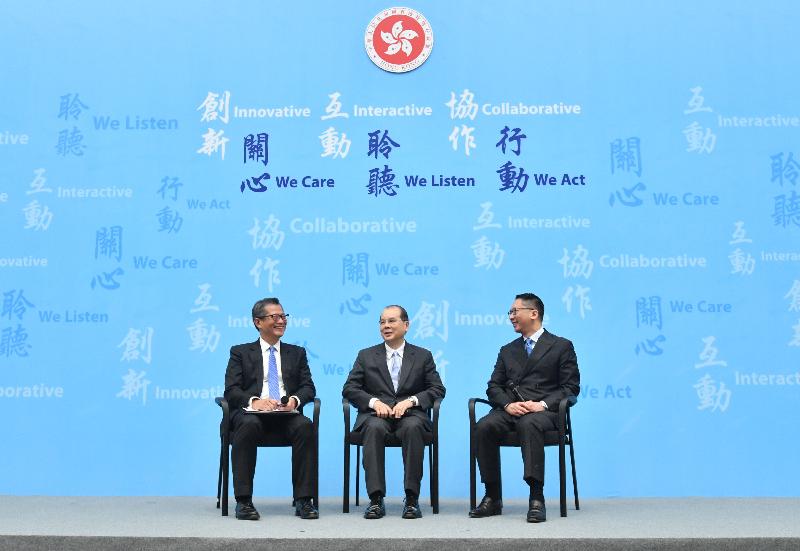