The Prosecution Week 2017 was launched today (June 23) to kick start numerous activities so as to enhance public understanding of the work of the Prosecutions Division of the Department of Justice (DoJ) and the criminal justice system in Hong Kong.

Speaking at the event's opening ceremony, the Secretary for Justice, Mr Rimsky Yuen, SC, said that one of the inherent and most fundamental spirits of the common law is the rule of law, which is also the theme of this year's Prosecution Week.

Citing various provisions relating to the administration of criminal justice in the Basic Law, Mr Yuen said that they, together with Article 63 and those provisions concerning judicial independence, and plus the protection enshrined in the Hong Kong Bill of Rights and the common law, constitute the overall framework within which our criminal justice system operates.

He said, "Justice should not be just measured by figures, but should be by reference to whether the law is adhered to, whether the evidence is fairly presented, and whether the victim and the accused are fairly treated and their rights duly protected."

At the same ceremony, the Director of Public Prosecutions, Mr Keith Yeung, SC, said that when it comes to upholding the rule of law, the Prosecutions Division adopts an unequivocal approach which is clear and emphatic and with no compromise.

"The Prosecutions Division has very important duties to discharge. The main and most important one is to decide whether to prosecute. When discharging that and all other duties, we are, as provided in paragraph 3.1 of our Prosecution Code, 'required to comply with and promote the rule of law'. That means, importantly, that the prosecution is required to act in the general public interest, but independently as a 'minister of justice'. In making decisions and exercising discretion, a prosecutor must act fairly and dispassionately on the basis of the law, the facts provable by the admissible evidence, other legally relevant information known to the prosecution, and any applicable prosecutorial policies or guidelines," Mr Yeung said.

He noted that compliance with the rule of law also means that the prosecution, when making decisions, ought not to be influenced by irrelevant considerations. These irrelevant considerations include investigatory, political or media interest; personal feelings or beliefs of the prosecutor; the possible political effect on the government, any political party, or group or individual; and possible media or public reaction to the decision.

He stressed the importance of prosecutorial independence and pointed out that Article 63 of the Basic Law stipulated that the DoJ shall control criminal prosecutions, free from any interference.

"We will do what deemed appropriate in compliance of the rule of law. Such is our privilege; but such is also the weight of our mandate. To implement this onerous but important mandate better, the society’s understanding is vital. This is exactly why it is important for us to continue to organise events like the Prosecution Week," he said.

Held for the sixth year, the Prosecution Week 2017 will run until June 30. A host of activities including visits to the DoJ and courts, talks and mock court exercises for schools, will be arranged. This year a law quiz was for the first organised and joined by 12 primary and secondary schools with good response. The winners were presented with awards at today’s ceremony. 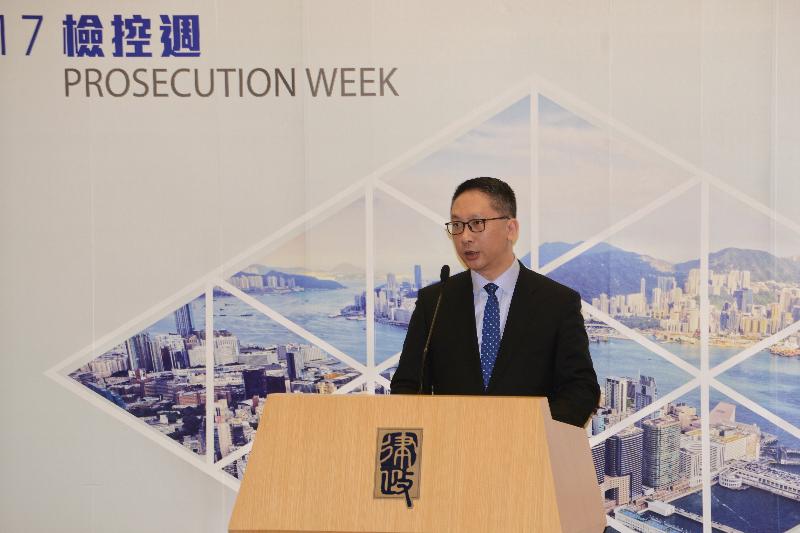