Following is the speech by the Secretary for Justice, Ms Teresa Cheng, SC, at the "Mediate First" Pledge Event today (May 24):

On behalf of the Department of Justice (DoJ), it is my great pleasure to welcome you all to the "Mediate First" Pledge Event 2019 organised by our department, and supported by the key players in the field of mediation in the Hong Kong Special Administrative Region (HKSAR).

The theme of this year's event is "Mediate First - Unlocking Potential". Undoubtedly, mediation has much potential for us to unlock and capitalise on. Opportunities of further development of mediation abound and they can be found locally, regionally and internationally.

Starting locally from Hong Kong, in November last year we saw the milestone of the opening of the West Kowloon Mediation Centre, a unique facility dedicated to mediation which is adjacent to the West Kowloon Law Courts Building. A Pilot Mediation Scheme providing mediation services to litigants of Small Claims Tribunal cases that are suitable for mediation, and other suitable cases, was launched last year. To meet the needs of the community, parties to suitable cases will only be required to pay a nominal, all-inclusive application fee of $200 each. Up till May 17, 2019, a total of 124 applications for mediation of Small Claims Tribunal cases had been received and mediation had now been conducted in 75 cases. Settlement was reached in 44 cases. Taking into account the seven further cases which were settled before any agreement to mediate was made, the overall success rate is 62 per cent. Such a result is encouraging.

We also witnessed a milestone last year. The Mediation Mechanism for investment disputes established in accordance with the Investment Agreement under the framework of the Mainland and Hong Kong Closer Economic Partnership Arrangement (CEPA) was implemented last December. The lists of mediation institutions and mediators mutually agreed by the two sides have been published. The DoJ has also been involved in the drafting of a set of mediation rules for adoption by designated mediation institutions and mediators.

The experiences that we accumulate locally and from the CEPA investment mediation mechanism place Hong Kong in a very good position in actively participating in and leading the development of mediation in the Greater Bay Area. The Greater Bay Area will be a place for us to experiment many new ideas and for the Hong Kong mediation professionals to unleash their potential. The Government will proactively explore the idea of setting up a Greater Bay Area Mediation platform which adopts a set of common standards on accreditation. Suggestions have been made for the proposed platform to adopt, on a pilot basis, a unified mediators' accreditation system to be established jointly by the Hong Kong Mediation Accreditation Association Limited and relevant Mainland and Macao mediation bodies. It is proposed that member organisations will have to subscribe to the unified mediators' accreditation system and mediation protocol established by the platform.

Another trend that has been gaining much impetus and quickly growing in popularity internationally is the development of sports mediation. In light of the 2020 Tokyo Summer Olympics and the 2022 Beijing Winter Olympics, we have included in today's programme a session on sports mediation to discuss the benefits offered by mediation in light of the unique nature of sports disputes and consider how mediators can achieve a win-win situation for those involved with the sports industry.

With the proliferation of cross-border disputes, new ideas, approaches and technologies are called for. LawTech can facilitate mediation for such disputes. In the 2018 Policy Address, the Chief Executive indicated support for funding the cost of non-governmental development of an e-arbitration and e-mediation platform so that Hong Kong will be able to provide efficient and cost-effective online dispute resolution services. Under the 2019-20 Budget, $150 million will be provided for the development and initial operation of the online dispute resolution and deal making platform. The DoJ is now working closely with the stakeholders in the development of the Online Dispute Resolution platform, which will facilitate the provision of cross-border one-stop dispute resolution services to enterprises worldwide including the Belt and Road region and the Greater Bay Area, as well as to the micro, small and medium-sized enterprises as proposed by Asia-Pacific Economic Cooperation's recent project on the establishment of an Online Dispute Resolution platform. Such an Online Dispute Resolution platform will redefine the ideas of deal making, negotiation, mediation, arbitration and e-commerce trading in the new innovation era.

Another major breakthrough happening in the international scene relates to the enforcement of mediated settlement agreements. Mediated settlements are reached by the parties amicably and hence in most, if not all, cases, parties would comply with them voluntarily. Indeed, one major advantage of mediation is that it may avoid difficulties in enforcement. Yet, from time to time, there would be some rare cases in which enforcement actions are necessary. The new Convention on International Settlement Agreements Resulting from Mediation caters for the enforcement of international mediated settlement agreements from any jurisdiction. The Convention was approved by the United Nations Commission on International Trade Law (UNCITRAL) last June and subsequently adopted by the United Nations General Assembly. A set of related Model Law has been adopted to ensure a more widespread acceptance by member states and smoother domestic implementation in local jurisdictions. They will add significant impetus to the development of mediation, particularly investment mediation, as a global means of dispute resolution.

The HKSAR Government is committed to promoting the development of mediation locally, regionally and internationally. The "Mediate First" Pledge, which was launched in 2009, has been our flagship campaign. The "Mediate First" Pledge is a statement of policy aimed at encouraging greater use of mediation as a flexible, creative and constructive approach in resolving disputes. Companies and trade organisations are encouraged to sign the Pledge to signify their willingness to first explore the use of mediation in the course of their operation before resorting to other means of dispute resolution such as litigation. Today, I am pleased to announce that over 600 companies and associations have already taken such action.

In addition, the DoJ has organised, on a biennial basis, an event such as this to raise awareness. In the past years, the "Mediate First" Pledge Event had been a half-day event focussing on the use of mediation by the local sectors. This year, to respond to the globally heightened awareness of the use of mediation, we have extended the programme to a full-day event catering for both local and international audiences.

In the programme today, we have a session on deal mediation. That is truly "mediate first", that is as you are closing a deal, you use mediation skills to help close the deal and develop your project.

At the Reception in the evening, we will officially launch the DoJ's social media platforms to promote mediation. Highlights of the Reception will also include the first "Mediate First" Pledge Star Logo Award Presentation Ceremony to acknowledge the achievements of pledgees who have promoted or adopted mediation to resolve disputes in their practice and the ceremonial signing of the "Mediate First" Pledge by new pledgees.

Lastly, I should mention the establishment of the Inclusive Dispute Avoidance and Resolution Office (IDAR Office) within the DoJ in January 2019. The IDAR Office is tasked to co-ordinate and implement various initiatives of the department in promoting the use of mediation and other means of dispute resolution. It will also pursue co-operation or partnership arrangements with other jurisdictions and international organisations with a view to raising the international profile of Hong Kong in deal making and dispute resolution through capacity building and promotional activities overseas.

Moving forward, we will step up our efforts in promoting the use of mediation and enhancing public awareness of its benefits with the aim of strengthening Hong Kong's position as an international legal and dispute resolution services centre. On this note, it gives me much pleasure to open the Mediate First Pledge Event 2019. May I wish this event every success. For those coming from overseas, I wish you all an enjoyable stay in Hong Kong. Thank you very much. 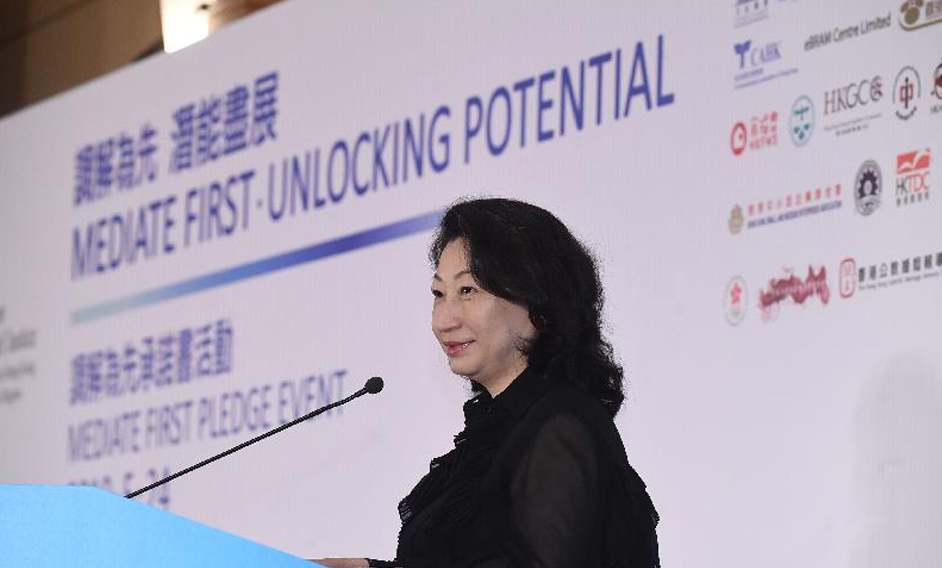