Transcript of remarks of press conference (with photos/video)

Reporter: Thank you Mrs Lam. Can you just shed a little bit more light on what you understand the arrangements will be during this vacuum period, particularly in terms of those lawmakers who were standing as candidates but were disqualified? And secondly on that topic of disqualification, what do you say to observers who view that disqualification as sort of the death of meaningful opposition in the Legislature? And thirdly, there’s some reports now of the Director of Public Prosecutions resigning from his post, Secretary for Justice, can you shed a little bit more light on that? He was citing divisions with yourself and are there divisions within your department and is this related to the National Security Law?

Chief Executive: I’ll answer the first two questions and I’ll see whether the Secretary for Justice is going to address your point. About the possible “lacuna”, or what you call a “vacuum” in the Legislative Council as a result of the postponement of the General Election scheduled on September 6, it is true that while we could use the Emergency Regulations Ordinance to postpone the LegCo Election by one year, we could not in the same regulation empower the continued operation of the Sixth Term Legislative Council because there is a Basic Law provision Article 69 which prescribes that every term of the Legislative Council, except the first term, should have a duration of four years. There is indeed a problem to address and that’s why I have submitted an urgent report to the Central People’s Government to seek advice and guidance. I’m very grateful that the State Council has given me a very expeditious reply and the reply says that first, they support the decision made by the Chief Executive in Council to postpone the LegCo Election by one year on grounds of public interest. And secondly, they acknowledge that there will be this problem of the status of the Legislative Council or a “lacuna” in the Legislative Council as a result of the postponement. What their guidance and advice to me is, the State Council will make a submission to the National People’s Congress Standing Committee for its decision. I’m not in a position to tell you what that particular decision will be because it has not been said in the reply from the State Council given to me. But I’m sure that a solution could be found because the National People’s Congress Standing Committee is the highest organ of power in the People’s Republic of China and over the years, various decisions and interpretations have been made to address problems faced in the Hong Kong Special Administrative Region. If you ask me, I will say that a logical solution will be what is stated in Section 11 of the Legislative Council Ordinance, for “emergency meetings” is to allow the preceding Legislative Council, that is the Sixth Term Legislative Council Members, to come back and to continue their business, i.e. to extend the term of the Sixth Term Legislative Council by one year. But this is my personal view as the Chief Executive. It’s not the content of the decision to be made by the National People’s Congress Standing Committee.

Now the second question about disqualifying certain nominated candidates, I think the Constitutional and Mainland Affairs Bureau has already issued a clear press release yesterday. You mentioned about somebody alleged that by disqualifying these candidates, would it be the death of a meaningful Legislature? I think in the Hong Kong Special Administrative Region, which is an inalienable part of the People’s Republic of China, and which Legislative Council Members are by law required to uphold the Basic Law and also to pledge allegiance to the Hong Kong SAR, a meaningful Legislature should comprise of Members who fulfil those two conditions. For any candidate who does not aspire to uphold the Basic Law or who does not want Hong Kong to be a part of the People’s Republic of China, they could not be part of a meaningful Legislature. That’s my reply, but everything is done in accordance with the law.

Secretary for Justice: I will just briefly reply. Indeed, the DPP (Director of Public Prosecutions) has informed me of his intention to leave on a particular date, but I think, in all fairness, we should allow him to make a proper statement at an appropriate time rather than to comment on this now when we are looking at a more important matter. Thank you.

Reporter: Hong Kong is a tech hub and there's ample time now for online or postal voting to be set up and for the poll to happen this year. Why won't the Government set up an alternative and how did the Government fail to see and set up contingency plans for this situation months ago? Second, the opposition won all but one District Council last year and we have the record turnout at the democrats' primaries. Polls all suggest the opposition may win big if the election were to happen now. Are you concerned about how a year-long delay may look to the outside world after the year of protests? And finally, a quarter of a million people were exempt from quarantine between February and June, according to the Government's own data. The health authorities have backtracked and admitted this exemption list has caused trouble. Will you accept this responsibility and also admit the error to Hong Kongers? And just if I can ask the SJ, David Leung has given a statement now. He's said he doesn't see eye-to-eye with you on the running of the Prosecutions Division. Could you give a response? Thank you.

Chief Executive: On the three questions, first of all, online voting, voting outside of Hong Kong, postal voting are all things that we should do in order to modernise Hong Kong's electoral arrangements to meet unforeseen circumstances. It's not a question of failure to see. I think nobody can anticipate an epidemic or a pandemic of this scale. This is an occasion for us to realise that there are deficiencies in the current electoral arrangements which will not enable us to respond positively to this sort of situation. I do hope that after things settle down a bit we will focus our minds together with the people, with the Electoral Affairs Commission and with the Legislative Council to see what we could do to enhance our electoral arrangements. This will be a major task for my colleagues on my left, but I think we should do it.

The second point is about a lot of things you have said. First of all, let me make it clear again in English that the decision to postpone the 2020 LegCo election has nothing to do with politics, has nothing to do with the likely outcome of this round of elections. It is purely on the basis of protecting the health and safety of the Hong Kong people and to ensure that the elections are held in a fair and open manner. My concern in whichever election is the same: we should conduct elections in a fair, open and honest manner. It is not for me to say that who should or who should not come onto the Legislative Council or the District Council. This is the choice of the electorate.

The third question needs a bit of clarification because you mentioned "a quarter of a million people" have been exempted. I think we released a press release a few days ago to explain that, since the day we introduced Cap 599C to put in place 14-day mandatory quarantine for arrivals from the Mainland, Taiwan and Macao and 599E for arrivals from all other places, we have hundreds and thousands of people coming in, and we already at the outset have a system of exemptions in place. These exemptions were not created recently; they are always there as part of a system because Hong Kong needs to operate. If we are going to say that no truck driver could come in, no air crew, no airplane could come in, no cargo vessel should come to Hong Kong to load and unload, that is not practical and not realistic because Hong Kong needs to import a lot of the goods and food and the daily necessities. To allow certain people to be exempted from the 14-day quarantine is an integral part of the quarantine system that has been put in place from day one, and the so-called "quarter of a million", to be exact is 290 000, they are trips, they are not people. I give you an example: A truck driver who drives across the border every day. In the initial period every arrival trip is a one passenger trip, because he would be given one notice of medical surveillance, and the 290 000 are notices of medical surveillance. But subsequently we realised that this was too cumbersome, so we turned it into 14-day. The notice of medical surveillance for truck drivers each has a validity of 14 days. But it still means that over a six-month period this truck driver will have been given 10, 12 notices of medical surveillance out of the 290 000. The figures have to be understood very clearly.

Yes, we put in place a system for very good reasons, but in the course of implementation and enforcement there are some gaps, particularly in the sea crew and the air crew, because for operational reasons these airlines and these shipping companies told us that it was not possible to put them through test and wait and so on, because the turnover time is very short. A pilot comes in on day one, probably needs to fly out in the evening. We just couldn't put him or her under a test-and-hold arrangement. This has produced some of the so-called gaps and we have plugged all those gaps through the tightening arrangement that we have put in place. I hope people will understand that managing an epidemic of this scale - it's not just Hong Kong, it's all over the world - we are seeing ups and downs in the confirmed cases because we do not have an effective vaccine yet. When we suppressed, we put in a lot of stringent measures, then the cases came down. When we relax a bit because people want normal life, then the cases will go up. We will have to cope with what people call a new normal for a period before an effective vaccine is available and supplied to the people of Hong Kong.

Secretary for Justice: What I said just now on the subject was said in English and I am sure you have heard it and understood it. 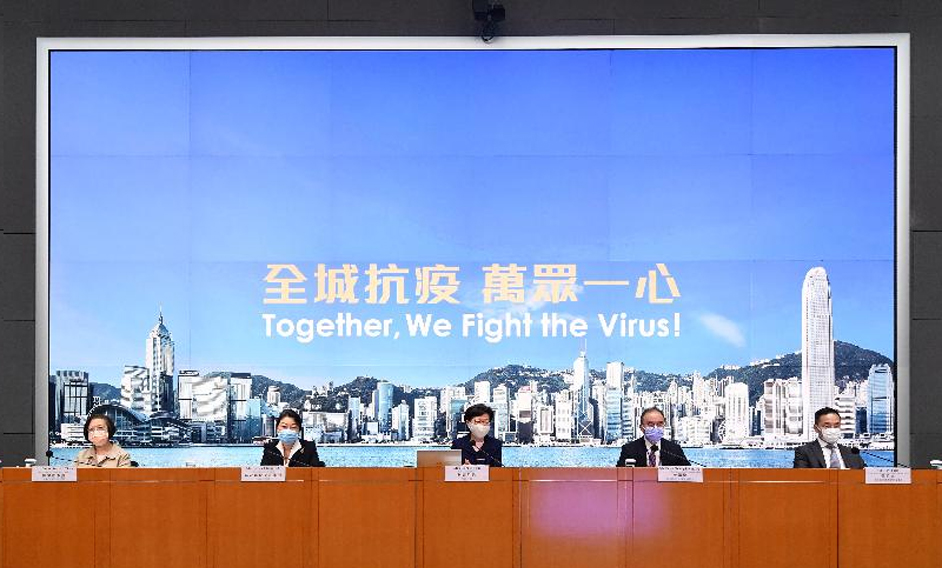 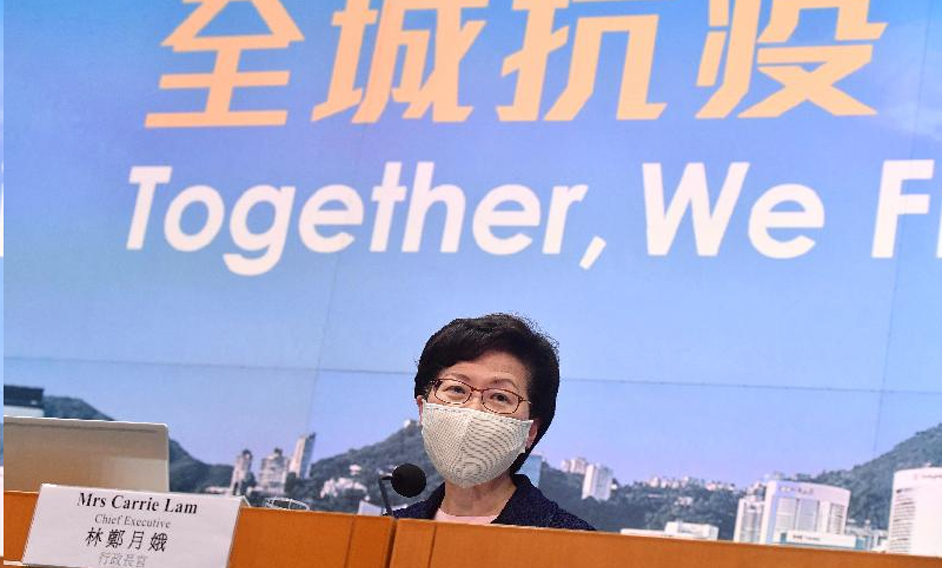