Ms Cheng pointed out that the Constitution clearly states the fundamental system of the People's Republic of China(PRC) and the fundamental rights and obligations of nationals. The Constitution is closely linked with the Basic Law and the "one country, two systems" principle. The National People's Congress (NPC), the highest organ of state power in the PRC, shall exercise powers to decide on the establishment of special administrative regions and the systems to be instituted. On April 4, 1990, the NPC adopted the Basic Law and made a decision on the establishment of the Hong Kong Special Administrative Region (HKSAR) in accordance with the Constitution. Article 1 of the Basic Law stipulates that the HKSAR is an inalienable part of the People's Republic of China, and "one country" is thereby the basis of "two systems".

Ms Cheng further explained to the students that China and the United Kingdom signed the Joint Declaration to resolve the issue of Hong Kong. There is no clause that provides for British rights or obligations to Hong Kong after the city's return to the motherland.

Ms Cheng added that the laws previously in force in Hong Kong, including the common law, shall be maintained as set out in the Basic Law. It also guarantees that the courts of the HKSAR shall exercise judicial power independently and criminal prosecutions of the Department of Justice (DoJ) are free from any interference, enabling the effective operation of Hong Kong's legal system.

Citing examples to illustrate traditional and non-traditional security under national security, Ms Cheng emphasised the importance of the enactment of the Hong Kong National Security Law (NSL) and improvements to the electoral system in the implementation of "one country, two systems". She explained that national security and the constitutional order of the HKSAR are matters under the purview of the Central Authorities. The NPC and its Standing Committee shall exercise powers to make decisions and laws.

Ms Cheng pointed out that the NSL plugged the national security loopholes that existed in Hong Kong by effectively preventing, suppressing and imposing punishment for any act endangering national security. She also explained the extraterritorial application of the NSL, granting of bail and other legal matters in order to clear the misconceptions in the community.

Stressing that political security is fundamental to national security, Ms Cheng highlighted the balanced and orderly political participation as well as broader representation brought about by the improvements to the electoral system, ensuring the steadfast and successful implementation of "one country, two systems".

Noting that there used to be suggestions that deliberate lawbreaking might be considered in order to achieve objectives, Ms Cheng strongly refuted such misinformation by stating at the forum that abiding by the law is one of the important features of the rule of law. Lawbreaking is never justified under the law. She urged young people to distinguish right from wrong and not to engage in any illegal activities. Ms Cheng also introduced to the students the Vision 2030 for Rule of Law initiative organised by the DoJ, which seeks to promote the proper understanding and recognition of the rule of law.

Today's forum was attended by students from Secondary Two to the third year of university studies. They have participated in the Basic Law Ambassador Training Scheme organised by the Joint Committee for the Promotion of the Basic Law of Hong Kong. Through a series of activities, they are expected to develop independent thinking from multiple perspectives and gain a better understanding of the Constitution and the Basic Law.

In her conclusion, Ms Cheng said she hoped that the forum today would enhance students' proper comprehension of the Constitution, the Basic Law, the NSL and the spirit of rule of law. She also invited them to promote these to their peers and friends, upholding the rule of law with concerted efforts. Lastly, Ms Cheng encouraged the students to take part in the diversified activities under Vision 2030 for Rule of Law. 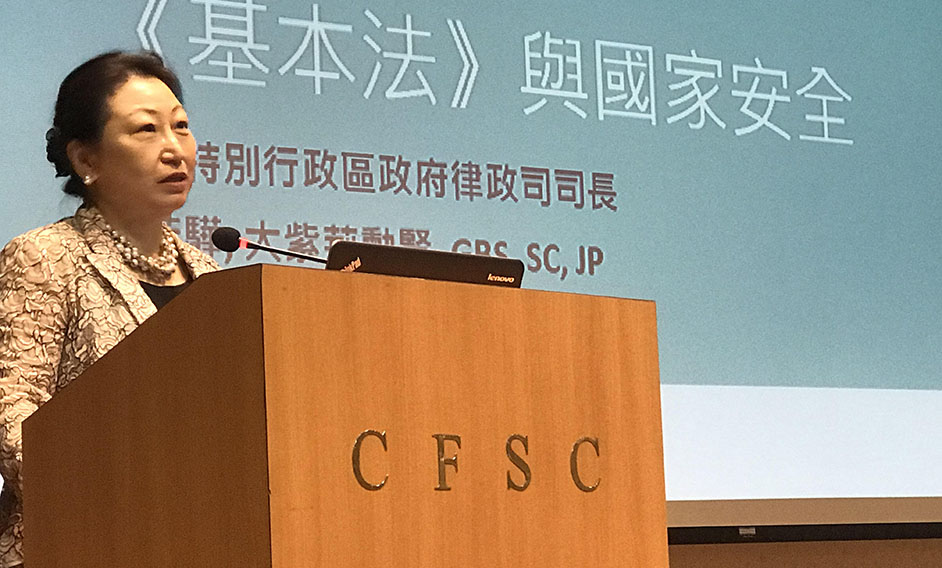 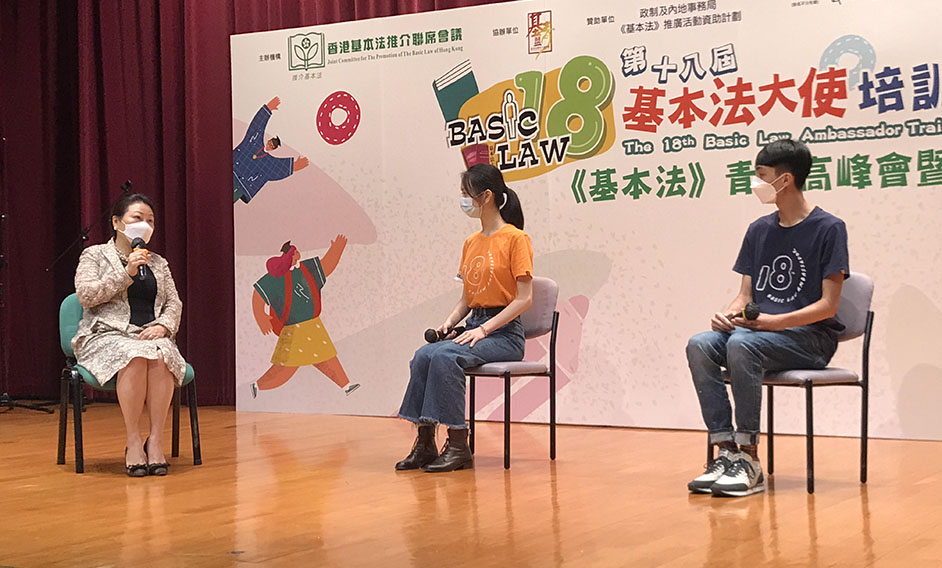