The Secretary for Justice, Ms Teresa Cheng, SC, gave a presentation on the opportunities for Hong Kong's legal and dispute resolution sectors under the national development today (December 15) at a seminar organised by the Association of Corporate Counsel Hong Kong, which was attended by corporate counsel from multinational corporations, statutory bodies, financial services and other professional sectors.

Ms Cheng first highlighted the importance of judicial independence, which is the bedrock of Hong Kong's legal system. She said that judicial independence is premised on the solid infrastructure that has been laid down in the Basic Law, including the security of tenure, the immunity of judges, and, importantly, the express provision in Article 85 of the Basic Law that guarantees judicial independence, free from any interference. Hong Kong judgments are cited in overseas jurisprudence from time to time, demonstrating the quality and confidence in the judiciary.

Elaborating on the competitive edge of Hong Kong's arbitration, Ms Cheng said that the National 14th Five-Year Plan and the Outline Development Plan for the Guangdong-Hong Kong-Macao Greater Bay Area (GBA) support Hong Kong to establish itself as the centre for international legal and dispute resolution services in the Asia-Pacific region, adding that the recent announcement by Premier Li Keqiang at the 59th Annual Session of the Asian-African Legal Consultative Organization (AALCO) in Hong Kong last month of the establishment of the AALCO Hong Kong Regional Arbitration Centre has clearly demonstrated the support of the Central Government to strengthen Hong Kong as a centre for arbitration and other dispute resolution services, including online dispute resolution services.

Ms Cheng continued by outlining the unique advantages of "one country, two systems" under which Hong Kong has concluded a number of significant arrangements with the Mainland, including that of interim measures and cross-boundary corporate insolvency. Hong Kong is the only jurisdiction outside the Mainland to have reached these arrangements. She also remarked that Hong Kong has endeavoured to promote investor-state mediation to resolve international investment disputes through capacity building in collaboration with renowned international organisations such as ICSID (International Centre for Settlement of Investment Disputes) and UNCITRAL (United Nations Commission on International Trade Law).

Other initiatives introduced by the Department of Justice (DoJ) to reinforce Hong Kong's position as an international hub for legal, dealmaking and dispute resolution services include the third party funding of arbitration and clarification on the arbitrability of intellectual property disputes. Ms Cheng also introduced the newly published report on the topic of "Outcome Related Fee Structures for Arbitration" released by the Law Reform Commission recommending that prohibitions on the use of outcome related fee structures by lawyers in arbitration be lifted. The proposed changes aim to enhance Hong Kong's competitiveness as a leading arbitration centre.

On the latest developments in the financial sector, Ms Cheng outlined the domestic legislations that have been passed to facilitate economic growth. For instance, the Limited Partnership Fund Ordinance was enacted to establish a new regime to enable private investment funds to be registered in the form of limited partnerships in Hong Kong while the passage of the Securities and Futures (Amendment) Bill and the Limited Partnership Fund and Business Registration Legislation (Amendment) Bill provides a commercially viable fund re-domiciliation mechanism with legal and tax certainty. She added that Hong Kong's financial infrastructure remains firm, ensuring steady growth in investment in Hong Kong with the city ranked as the world's top initial public offering venue in seven of the past 12 years. The funds raised for the first six months this year reached $210.4 billion, an increase of 127 per cent when compared with $92.8 billion for the same period last year.

Speaking on the business opportunities in the Mainland, Ms Cheng pointed out that the DoJ is exploring the feasibility of allowing WOKEs (wholly owned Hong Kong enterprises) in Shenzhen to adopt Hong Kong law and choose for arbitration to be seated in Hong Kong. She added that the GBA Legal Professional Examination that will be held again in June next year and the implementation of the CISG (United Nations Convention on Contracts for the International Sale of Goods) next year will also help the legal sector tap into the opportunities in the GBA and regions and countries along the Belt and Road.

In concluding, Ms Cheng encouraged the legal and dispute resolution sectors to seize the immense opportunities brought about by the national development. 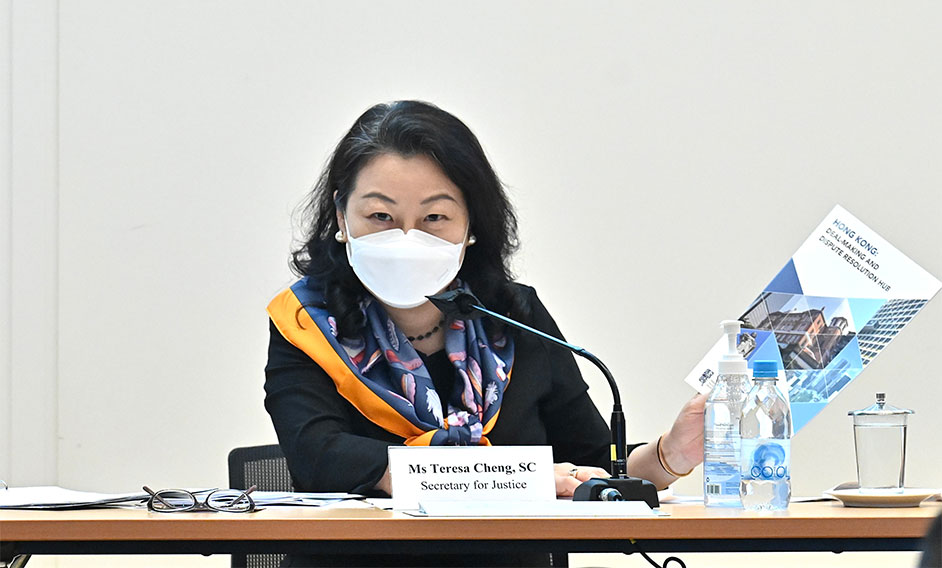 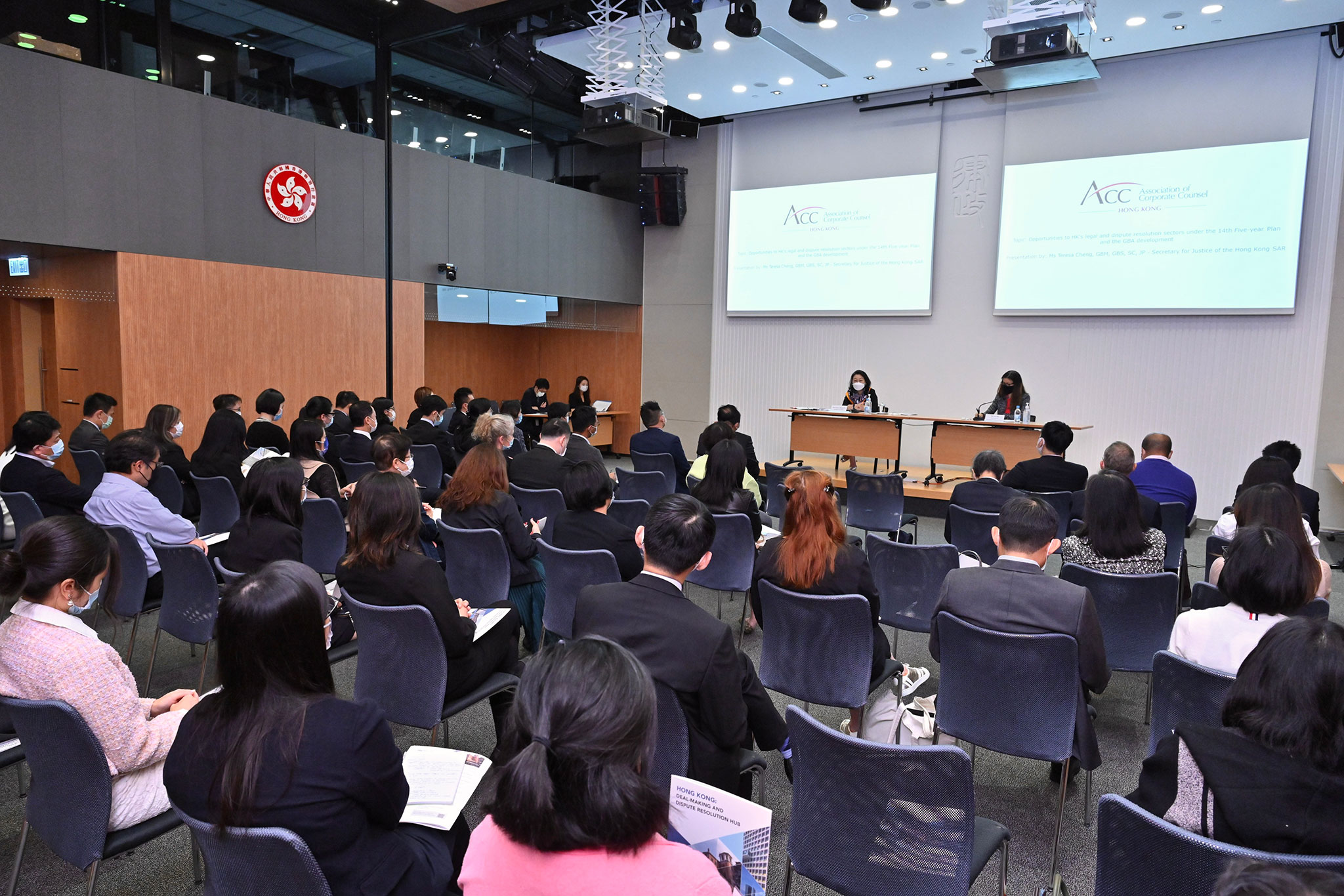