Following is the keynote speech by the Secretary for Justice, Ms Teresa Cheng, SC, at the Sports Dispute Resolution Conference under the Hong Kong Legal Week 2020 today (November 5):

It is my great pleasure to be speaking with you all today in this online Sports Dispute Resolution Conference. At this point in time, you may have already got used to attending virtual events as we move to the "new normal" in light of the global pandemic. Indeed, I have just come from delivering a keynote speech in a conference that is being right now held in Hainan, simply because of the technology that has made that available.

The pandemic has affected all walks of life, and the sports industry is of no exception. From the postponement of the Tokyo 2020 Summer Olympics to the cancellation of all levels of leagues in different countries, numerous sports-related disputes have arisen. Further, with the Beijing 2022 Winter Olympics upcoming, it is foreseeable that the demand for sports dispute resolution will be on the rise.

The modern sports world is highly institutionalised and regulated. At the heart of international sports, the dominant institutional framework is defined by the Olympic Movement, which is a non-governmental organisational structure with the International Olympic Committee being the supreme authority. International sports federations, such as FIFA (Fédération Internationale de Football Association) and the Badminton World Federation, are also one of the main constituents of the Olympic Movement and they are responsible for governing one or more sports at the world level. These federations often establish and administer their own rules, regulations, guidelines and policies for specific sports, which are expected to be complied with by the athletes, associations and clubs.

Apart from the institutional and regulatory side, the sports industry is also heavily commercialised. Corporations are keen to sponsor professional teams and events, and the media often compete for the broadcasting rights. Other commercial rights such as image rights and intellectual property rights have also emerged as the sports industry continues to grow rapidly.

In light of these unique features of the sports world, the legal framework governing sports is a mix of general legal principles and a distinctive body of law known as "sports law". While we have the general legal principles concerning contract, tort, agency, competition, employment and trademark etc, applicable in the sports context, the international sports law is a separate and coherent set of rules, principles and procedures that specifically governs the conduct and consequences of international sports. Under the umbrella of international sports law, a large part relates to sports dispute resolution, particularly governed by the Court of Arbitration for Sport (CAS).

Court of Arbitration for Sport

In the early 1980s, as international sports developed, the number and scale of sports-related disputes involving different nations and regions also increased. An independent and impartial authority specialising in sports-related disputes was therefore called for. Further, given the transient nature of sports, it was also demanded that the sports dispute resolution process should be expeditious. It was against such a background that the CAS was established in 1984 and it remains the leading international body for sports dispute resolution today.

The main function of the CAS is to resolve legal disputes directly or indirectly related to sports through arbitration or mediation. The disputes may relate to issues such as contractual breaches, disciplinary matters, doping, athlete eligibility and commercial disputes relating to sponsorship and advertising etc.

The jurisdiction of the CAS may be invoked by any individuals or legal entities such as athletes, sports federations, clubs, sports event organisers or sponsors so long as the parties have agreed to submit the disputes to arbitration by the CAS. Such agreement usually exists in the form of an arbitration clause in the contracts or in the statutes or regulations of a sports organisation.

The arbitral award issued by the CAS is final and binding. It is enforceable in accordance with the New York Convention and can only be appealed against to the Swiss Federal Court on extremely limited grounds such as lack of jurisdiction, violation of procedural rules or incompatibility with public policy, just as in any other arbitration.

The CAS mediation can be conducted even after the parties have commenced an ordinary or appeal arbitration procedure. Further, the "Med/Arb" procedure is also available. In those procedures, if the parties fail to reach a settlement in mediation, they may still resort to arbitration.

While the CAS offers both arbitration and mediation services, it is apparent that arbitration is the dominant form of dispute resolution for sports disputes. This perhaps can be illustrated by the fact that there are currently around 400 CAS arbitrators but only around 60 CAS mediators.

Both being alternative dispute resolution mechanisms, sports arbitration and sports mediation share common features. For example, in both proceedings, the parties can appoint someone who has expertise on sports law and a deep industry understanding. Needless to say, the fundamental nature of the two mechanisms are different in that arbitration is adjudicative while mediation aims to achieve a win-win situation.

Sports mediation, while underused in the past, is gaining worldwide attention in recent decades. Mediation is generally suitable for sports disputes which are of commercial nature and especially where parties' interests and relationship are of importance. For example, the dispute between the National Hockey League and its Players' Association in 2012 concerning their collective-bargaining agreement was successfully resolved after a 16-hour mediation session. (Note)

The characteristics of the mediation process provide various benefits to the disputing parties when this mechanism is used for resolving sports disputes. First and foremost, mediation is interest-based. The process does not inquire into apportionment of fault but focuses on the common ground based on the parties' interests and concerns. Through amicable settlement, the parties may preserve their personal or business relationships. This is particularly significant as interpersonal relationships are important in the sports world, especially between athletes and coaches as well as between players and clubs.

Secondly, mediation is flexible and quick. With minimal procedural formality, the parties can retain control over the process and solutions, and the time taken to resolve a dispute could be much shorter. Timely resolution of disputes is crucial to the athletes as they generally have a relatively short career life.

Thirdly, the mediation process is confidential in nature which may be of very high value by world-class players so that they can manage the media.

Despite the multiple benefits I just mentioned, in some cases, sports arbitration will remain the preferred form of dispute resolution. For instance, in disciplinary matters and anti-doping cases where rigid rules and regulations are involved, the adjudicative element in sports arbitration is required in order to rule on whether there has been any breach and if so, the sanctions to be imposed.

Although sports arbitration and sports mediation are different processes, they are not necessarily a dichotomy. Looking at sports dispute resolution from a broader perspective, the two mechanisms may be complementary to each other. You will hear more from our esteemed speakers in the upcoming panel sessions.

Today's conference is just the Department of Justice's first step in promoting the wider use of alternative dispute resolution for resolving sports disputes. We hope that this will arouse more interest and awareness from both the sports sector and the legal sector on the matter.

On this note, I wish all participants a very fruitful conference today. Thank you very much. 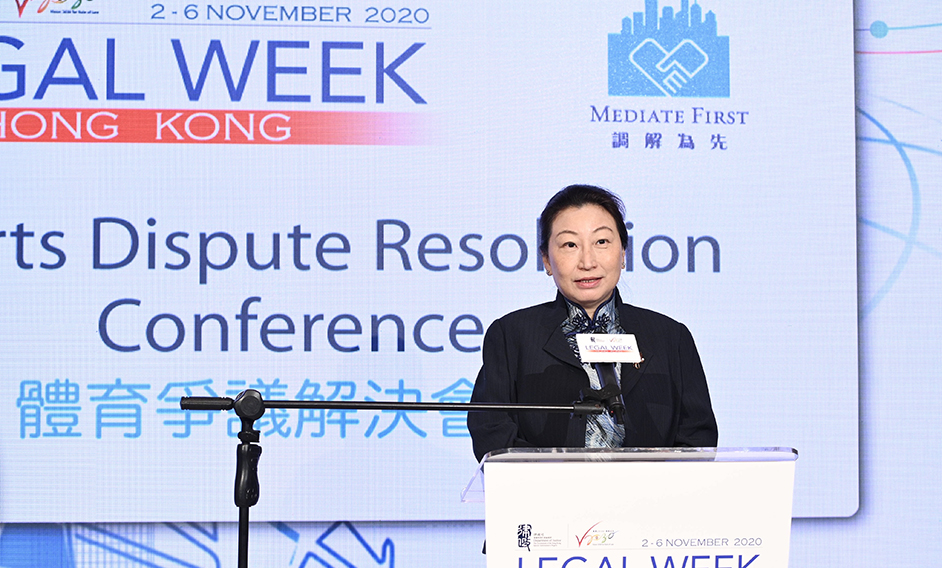