Following is the closing remarks by the Secretary for Justice, Ms Teresa Cheng, SC, at the UNCITRAL Working Group III Virtual Pre-Intersessional Meeting - The Use of Mediation in ISDS on November 9:

Good afternoon, good evening or perhaps even good night or good morning to some parts of the world. Thank you very much for participating in this pre-intersessional meeting.

Hong Kong Special Administrative Region (HKSAR) is most honoured to have the opportunity to co-organise with UNCITRAL and the Asian Academy of International Law (AAIL), today's pre-intersessional meeting for Working Group III to contribute to the discussion on the use of mediation in ISDS (investor-State dispute settlement). This virtual pre-intersessional meeting, a first of its kind, is our featured event this year, following our flagship Hong Kong Legal Week and the annual Mediation Lecture we had last week.

We would like to especially thank the Central People's Government and UNCITRAL for supporting today's pre-intersessional meeting. This is in fact the first time for the HKSAR to organise an event for a Working Group of UNCITRAL. This indeed reflects our innovative aspect of the "One Country, Two Systems" and the Basic Law under which representatives of the HKSAR participate in the work of UNCITRAL as members of the Chinese delegation.

As I have previously discussed in the Chartered Institute of Arbitrators' Alexander Lecture, entitled "The Search for Order within Chaos in the Evolution of ISDS", development of mediation is one of the two strands in the "double helix" approach for the evolution of ISDS.

We are pleased to see that the greater use of mediation is a reform option that has attracted much interest and support among delegations of Working Group III, especially in its 39th session recently held in October.

Much has been said on the benefits of investment mediation. Evidently, it provides a flexible and voluntary dispute resolution mechanism that allows foreign investors and host jurisdictions to resolve their investment disputes through creative and forward-looking settlement arrangements and preserve their long-term relationships.

Various structural and policy impediments to the greater use of mediation in ISDS nevertheless exist. A number of studies and the experience of the speakers suggest that, as compared with investors, governments may face some unique challenges, such as a lack of familiarity with mediation and the absence of facilitative frameworks at the domestic and treaty levels for the use of mediation.

In panel session 1, we have heard the experience of a broad spectrum of actors in the area of ISDS, ranging from international organisations, government officials, practitioners to academics, in seeking to overcoming challenges to the use of mediation in ISDS. The range of options are diverse, which may even include an opt-in style multilateral instrument.

At a bilateral level, one must not forget the possibility of pre-dispute and post-dispute agreement to mediate. In the case of the CEPA Investment Agreement between the Mainland and the HKSAR, a pre-dispute mediation clause provides for dispute resolution. Given that mediation is entirely consensual, with enough knowledge, parties may still be able to opt-in to use mediation even after the dispute arises.

Panel session 2 and session 3 can perhaps be best viewed together.

On the process design of a multi-tiered or hybrid dispute resolution mechanism, as explored in the panel sessions, there is no limit to creativity.

As discussed in the presentation by Ronald (Head of Dispute Resolution (Asia), Addleshaw Goddard LLP, Mr Ronald Sum), the CEPA Investment Mediation Rules may be a suitable model for the Working Group to look at in developing a set of protocol that can be incorporated into international investment agreements.

The idea for a permanent investment court to foster mediation is also a possibility. The permanent investment court would entail a radical revolution of the ISDS system, and the desirability of such revolution, as opposed to a natural evolution of ISDS, is probably a matter to be better discussed and carefully examined on another day. In any event, today's discussion illustrates that mediation is a mechanism that works well in any setting, whether in a multi-tiered or hybrid dispute resolution mechanism.

There is a lot of food for thought as there is in fact an infinite number of ways to tailor make a process using mediation as an essential ingredient. I tend to think that catering for a number of set rules of the multiple iterations may not be all that practical and perhaps a mediation protocol or a protocol for a multi-tiered or hybrid process may be the way to go.

Ideally, mediation protocol should enshrine values of rule of law and sets out a basic and highly customisable framework that can be adapted to the disputing parties’ preference and the nature of the particular disputes. Such mediation protocol should also place strong emphasis on cost efficiency and adhere to the principle of voluntary participation. In the context of investment mediation, the protocol will also need to strike the right balance between transparency and confidentiality.

In panel session 4, a summary on the way forward for mediation as an ISDS reform option seems to be focused on three main directions: "getting the frameworks right", "overcoming psychological barriers through education" and "unlocking mediation's synergy with other ISDS reform options".

"Getting the frameworks right" is essential for empowering, incentivising, regulating and facilitating the use of mediation by government officials and investors in resolving ISDS disputes.

There are two dimensions to such frameworks, one being the treaty level and another being the domestic level. At the treaty level, it is mainly concerned with the development of model treaty clauses on mediation and investment mediation protocols for international investment agreements to provide a roadmap to guide the disputing parties in their use of mediation. At the domestic level, we have heard the useful sharing by Alejandro (General Counsel and Head of Conflict Resolution Centre of the International Energy Charter, Mr Alejandro Carballo-Leyda) on the Model Instrument on Management of Investment Disputes developed by the Energy Charter Secretariat, which sheds light on how governments may establish or refine their domestic institutional frameworks to facilitate, amongst others, the use of mediation for resolving ISDS disputes.

To overcome the psychological barriers for disputing parties over the use of mediation in ISDS, "education, education and education" is the very key, and the target audience must include government officials.

Since 2018, the Department of Justice (DoJ) has partnered up with leading institutions such as AAIL, ICSID and International Energy Charter to offer its flagship Investment Law and Investor-State Mediator Training Courses. The two rounds of courses were attended by over 90 participants from over 26 countries around the world, including government officials as well as legal and mediation practitioners. We are indeed pleased to have one of our alumni, Mr Dinay (Acting Assistant Parliamentary Counsel, Attorney-General's Office, Mauritius, Mr Reetoo Dinay), joining us today to speak on the subject of mediation and share his experience on putting mediation into practice in his work for the Mauritius government after completing the course.

The DoJ will continue to offer the capacity building courses on investment mediation in the near future, with the next round to be held in 2021.

Apart from mediation, Working Group III is looking at various other ISDS reform options. Given the inherent nature of mediation as a flexible mechanism, one can see that there is room for exploring the potential synergy of mediation with other reform options such as ISDS appellate mechanism, dispute prevent mechanisms, as well as the establishment of an Advisory Centre on International Investment Law as discussed in the presentation by Charlie (Counsellor of the Department of Treaties and Legal Affairs, Ministry of Foreign Affairs of Thailand, Dr Charlie Garnjana-Goonchorn).

Following today's pre-intersessional meeting, probably there are a lot of ideas on the plate of the UNCITRAL Secretariat with respect to what the Working Group may work on with respect to mediation.

Having good ideas on papers is however not enough, and it is also crucial to consider how the Working Group can practically achieve progress in its work on mediation within a reasonable period of time, especially when the Working Group does have a wide range of ISDS reform issues to tackle.

During the 39th session of Working Group III, the Chinese delegation mentioned the possibility for the Working Group to resort to other constructive, inclusive and transparent working methods to develop the work on mediation, in addition to its formal sessions. As a preliminary idea, the use of informal drafting groups or experts groups may be an option worth being considered, especially for developing the texts on model treaty clauses and investment mediation protocols as well as the relevant guidelines.

We hope that today's pre-interessional meeting manages to facilitate Working Group III in its consideration on how to further unlock the potential of mediation as an ISDS reform option.

To contribute to the process of Working Group III, the insights in today's discussion and the background papers prepared by the various practitioners from Hong Kong will be crystallised into a proceedings, which will subsequently be made available to the Working Group.

While we cannot meet in person today due to the COVID-19 pandemic, we are pleased to report that the use of technology allows us to make this event accessible live online and reach out to 74 countries or regions with around 530 registrations. In this relation, it is also worth mentioning that Hong Kong actively supports the greater use of technology in international trade and the DoJ Project Office for Collaboration with the UNCITRAL has officially opened in the Hong Kong Legal Hub to work on this area.

Hopefully, the world will soon recover from the pandemic. We look forward to welcoming you all in person here in Hong Kong at the next intersessional meeting in 2021. 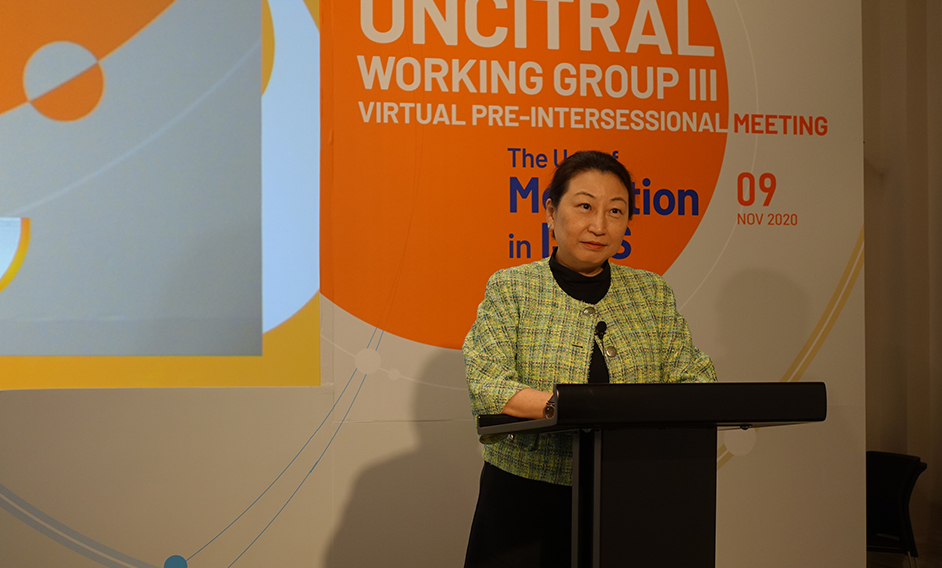