Speech by SJ at ADR in Asia Conference: Tomorrow's Disputes Today (English only) (with photo)

Following is the speech by the Secretary for Justice, Ms Teresa Cheng, SC, at the ADR in Asia Conference: Tomorrow's Disputes Today hosted by the Hong Kong International Arbitration Centre (HKIAC) under the 10th Hong Kong Arbitration Week today (October 27):

It's a great pleasure for me to speak in the ADR in Asia Conference. This year's Conference covers important topics of arbitration, starting with those that are in place and fundamental to arbitration, to a look into the future trend.

For parties to arbitration, the availability of interim measures is of paramount importance. The grant or refusal of interim measures may sometimes be determinative of the dispute between the parties. Interim measures such as evidence and property preservation measures will not only provide parties with an avenue to obtain access to justice in a timely manner but will also secure the fruits of dispute resolution.

As a result of the groundbreaking interim measures arrangement signed with the Mainland in 2019, parties to arbitral proceedings seated in Hong Kong and administered by one of the six arbitral institutions would be able to apply to the Mainland courts for interim measures. Such measures include property preservation, evidence preservation and conduct preservation. Hong Kong is the first and only jurisdiction in the world outside of the Mainland where this is possible. This arrangement no doubt increases Hong Kong's attractiveness as a seat of arbitration, and also showcases our unique strengths under "one country, two systems".

To familiarise Hong Kong and Mainland legal practitioners with the arrangement, the Department of Justice and the Supreme People's Court jointly organised a training session on October 19, 2019. Thanks to the support of the Supreme People's Court, the session was very well-received and provided the arbitration community with practical insights on both the procedural and substantive issues in interim measures applications. On August 17 this year, the Department also co-organised with CIETAC (China International Economic and Trade Arbitration Commission) Hong Kong Arbitration Center a webinar on the practical implementation of the arrangement in which a judge from the Supreme People's Court and Hong Kong practitioners shared their updated views and knowledge on the topic. This event was again a great success. It attracted approximately 800 online viewers, comprising legal and dispute resolution practitioners, as well as participants from the academic and business sectors.

Two years have passed since the arrangement came into operation on October 1, 2019. I am glad to hear that many practitioners have regarded the arrangement as a game-changer and the number of interim measures applications made to Mainland courts under the arrangement keep increasing. As at September 14, 2021, the designated institutions have processed over 50 interim measures applications made to 23 Mainland courts for the preservation of evidence, conduct or assets worth RMB14.6 billion in total. From the information made available by the HKIAC, 32 of those decisions have been issued by the Intermediate People's Courts, amongst which 30 granted the applications for preservation of assets upon the applicant's provision of security and two rejected the applications. The total value of assets preserved by those 30 decisions amounted to RMB10.9 billion.

Looking forward, we will continue to listen to the views of the international arbitration community and see what we can do to further enhance the existing arrangement.

In a recent decision of C v D (Note 1), an issue arose as to whether failure to comply with the pre-condition to arbitration, i.e. the requirement to attempt negotiations before arbitration, excludes the tribunal's jurisdiction or merely goes to admissibility of the claim.

In that case, the contract in issue stipulated that, if a dispute arose between the parties, "the parties should attempt in good faith promptly to resolve such dispute by negotiation". The contract went on to say that "Either Party may, by written notice to the other, have such dispute referred to the Chief Executive Officers of the Parties for resolution", and that if any dispute could not be resolved amicably within 60 business days of the date of a party's request in writing for such negotiation, such dispute should be referred to arbitration.

The plaintiff in that case contended that due to the failure by either party to give written notice to have the dispute referred to the CEOs of the parties for resolution, the tribunal lacked jurisdiction. The defendant, on the contrary, argued that the condition to arbitration was satisfied as it had given written request to negotiate by a letter to the Chairman of the Board of Directors of the plaintiff, and in any event the question of whether the condition precedent had been fulfilled was a question of admissibility rather than jurisdiction.

The Court of First Instance held that the non-compliance with the pre-condition to arbitration merely goes to admissibility of the claim. On the facts of the case, there was no indication that the parties intended compliance with the relevant provisions to be a matter of jurisdiction. Notably, having gone through all the international authorities which suggested that non-compliance with procedural pre-conditions to arbitration merely goes to the admissibility as opposed to jurisdiction, the judge concluded that this approach was "entirely consistent with the policy in Hong Kong law which respects the parties' autonomy in choosing arbitration as the means to resolve their disputes with its incident of speed and finality as well as privacy". Having said that, I must point out that this case is now under appeal and we will no doubt revisit the issue when the appeal judgment is handed down.

In some jurisdictions such as Mainland China, where redemption, trading and circulation of virtual currencies are prohibited, there may be challenges to a crypto-related arbitral award. In 2018, the Shenzhen Intermediate People's Court in a civil ruling (Note 2) set aside an arbitral award compensating the claimant the US dollar equivalent of Bitcoin which was then converted into Renminbi on the ground that awarding damages in US dollars in lieu of Bitcoin was against the public interest.

The reasoning of the Shenzhen Court is that according to a certain Circular (Note 3) and Announcement (Note 4) of the PRC (People's Republic of China), Bitcoin does not have the same legal status as a fiat currency, and cannot and should not be circulated in the market as a currency. Any so-called token financing and trading platform shall not, among other things, engage in exchange business between fiat currencies and tokens or between "virtual currencies". As such, the arbitral award which ordered damages in US dollars in lieu of the Bitcoin amounted to redemption and trading between Bitcoin and fiat currency in a disguised form, which violated the public interest in the PRC, namely order and stability of the financial market.

In Hong Kong, arbitrability of these crypto-related disputes probably would not be an issue. Trading in cryptocurrencies and other virtual assets is not prohibited here in Hong Kong. Under Article 112 of the Basic Law, the free flow of capital is protected. Article 115 of the Basic Law further provides that Hong Kong shall pursue the policy of free trade and safeguard the free movement of goods, intangible assets and capital. In addition, Hong Kong has a sophisticated and internationalised financial market, internationally aligned regulatory regimes and strong rule of law. It is home to a large pool of financial and legal talents who are well-equipped to handle complicated issues arising from the ever evolving currency and financial market.

In terms of the regulatory regime for the cryptocurrency industry, the Government has proposed a new licensing regime under the Anti-Money Laundering and Counter-Terrorist Financing Ordinance for platforms which trade any type of crypto-assets, even if none are classified as securities. Under the new proposal, if these trading platforms are registered in Hong Kong under the Companies Ordinance, they will be required to comply with the SFC (Securities and Futures Commission) licence. Given the risks associated with cryptocurrencies, in Hong Kong it is proposed that these platforms can only provide services to professional investors. The new regime aims to ensure that the general public is well protected and at the same time, ensure the healthy and orderly development of the crypto market, thus maintaining the stability of the financial market.

It is also noteworthy that Hong Kong has an online dispute resolution and deal making platform, as we have seen HKIAC has launched and there are other places which are providing such one-stop shop platform for commercial parties by which disputes can be resolved from all over the world. With these new developments and the inherent strengths of Hong Kong as an international financial and dispute resolution centre, we believe that Hong Kong is well-placed to resolve these crypto-related disputes as an arbitration venue. I am sure the experts at the Conference today will share more on the unique strengths of Hong Kong's dispute resolution services in this particular area.

I note that the Honourable Charles Brower will offer his views on tomorrow's arbitrator in this Conference. I am very excited to hear from such an experienced arbitrator. Apart from the core qualities of an arbitrator, we should always keep an open mind about the choice of arbitrators. Diversity and inclusion in terms of gender and ethnicity of arbitrators should be encouraged and promoted. This is indeed echoed by the EU (European Union) Diversity Charters which encourage organisations to promote diversity and equal opportunities in the workplace, regardless of age, disability, gender, race or ethnic origin, religion or sexual orientation.

Today's Conference entitled "Tomorrow's Disputes Today" is very apt. Hong Kong is no doubt well-equipped to resolve any future disputes, including those arising from the growth of digitalisation or financial technology. On this note, I wish to conclude and say happy anniversary to the Hong Kong Arbitration Week and I wish this Conference a great success. Thank you very much. 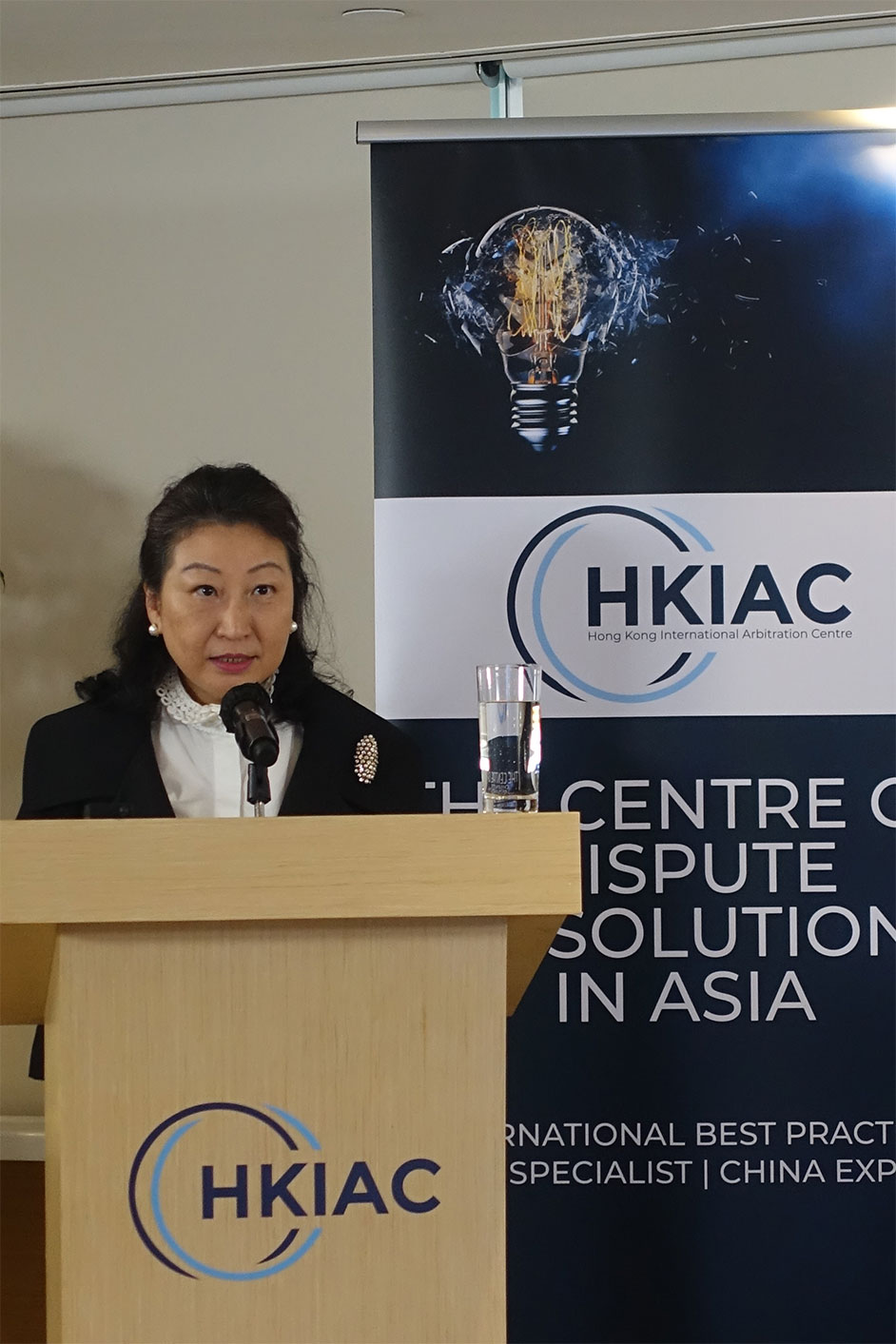