Speech by SJ at Maritime Dispute Resolution in Hong Kong: Current and Future (English only) (with photo)

Following is the speech by the Secretary for Justice, Ms Teresa Cheng, SC, at Maritime Dispute Resolution in Hong Kong: Current and Future under Hong Kong Legal Week 2021 today (November 2):

It is my pleasure to join you in today's Forum. The Hong Kong Legal Week is held in the first week of November each year. And this year we have a beautiful collaboration with the Hong Kong Maritime Week. And for this reason, naturally, I am doubly happy today.

Global calls for collaborative innovation within the maritime sector

With maritime transport handling 80 per cent of global trade volume, the maritime industry was the first to bear the brunt of the effects of COVID-19. Nonetheless, global maritime trade picked up in the first quarter of this year. This is indicated by the increase of 10.7 per cent in the volume of container shipping, which amounts to 42.9 million TEUs, as reported by BIMCO. China's exports have surged by 33.7 per cent from January to August this year, providing an impetus to the recovery of maritime activities.

Sailing into the new normal under the post-pandemic world, the maritime industry is still overwhelmed by the rising tides of digitalisation and decarbonisation. To stay competitive, the maritime industry must act promptly to upscale its innovation capabilities to achieve technological and green industrial transformation, which calls for a new source of funds and talents. Enhanced collaboration within the industry and associated services suppliers are crucial to meet new trends and demands, including smart ports, green financing, sustainable energy, ESG (environmental, social and governance), etc. As a premier international maritime centre and gateway for trade between the Mainland and the rest of the world, Hong Kong has much potential to advance and strengthen our position as a high value-added integrated service hub.

It is in line with the Government's commitment to leverage on our intrinsic strengths in high value-added maritime services.

The global competitiveness of Hong Kong as a maritime hub is fuelled by China's increasing influence in the commercial maritime world developing in the past decade. In the first quarter of 2021, China possessed 11 of the top 100 ports in the UNCTAD (United Nations Conference on Trade and Development)'s Liner Shipping Connectivity Index, including Hong Kong. China accounted for seven of the world's top 10 busiest ports, with three of them from the GBA, namely Shenzhen, Guangzhou and Hong Kong.

As an international maritime centre, Hong Kong aims to differentiate itself from other counterparts by its offerings of a host of quality and wide-ranging maritime services, including ship management and ship owning, to high value-added professional services such as ship finance, marine insurance and dispute resolution. At present, there are over 900 shipping-related companies operating here, and I believe that this will continue to grow.

Let me turn to today's topic, which is the current and future of maritime dispute resolution in Hong Kong. Arbitration, as we all know, has been a preferred mode for resolving maritime disputes. It provides for a final and binding award enforceable in over 160 jurisdictions under the New York Convention. Hong Kong's strength as a reputable maritime arbitration centre is evidenced by its inclusion as one of the four designated arbitration venues by BIMCO under its new Law and Arbitration Clause 2020.

Hong Kong's arbitration services have been increasingly relied upon by local and international parties for its advantages. Under "one country, two systems", Hong Kong has recently entered into several arbitration-related arrangements with the Mainland, including the supplemental arrangement to refine the mechanism of mutual recognition of arbitral awards, and an arrangement to allow parties to Hong Kong seated arbitrations to seek interim measures directly from Mainland courts. Hong Kong is the only jurisdiction to benefit from this interim measures arrangement.

Hong Kong has an international and diversified pool of legal and dispute resolution talents with over 11,500 practising solicitors and barristers, together with more than 85 foreign law firms and 1,500 registered foreign lawyers from 33 jurisdictions. As Hong Kong has attracted many commercial principals of the maritime industry to establish their presence here, we have abundant commercial men who know the industry well.

As guaranteed by the Basic Law, Hong Kong practices common law, which is based on the English law. Lawyers in Hong Kong with a common law background are well versed in our legal system and also other common law jurisdictions around the world. Hong Kong shares the same roots with the English law, especially in commercial matters. Hong Kong is the only common law jurisdiction where our law is enacted in both Chinese and English. All courts and tribunals can operate in both languages. This bilingual policy provides easy access to justice in Hong Kong for both English and Chinese operated businesses. Hong Kong's judicial independence is world renowned, with its open and fair proceedings where due process is well observed. As Lord Sumption, one of the 12 Non-Permanent Judges of the Hong Kong Court of Final Appeal, said, "(t)he permanent judiciary of Hong Kong is completely committed to judicial independence and the rule of law. Successive chief justices have made this clear in public statements. These statements are not just lip service. They represent the convictions of experienced, courageous and independent-minded judges."

According to the Worldwide Governance Indicators project of the World Bank Group, Hong Kong's percentile rank in respect of the rule of law was 69.85 in 1996. Upon China's resumption of exercise of sovereignty over Hong Kong in 1997, Hong Kong's score reached 74.75 in 2000, and has been consistently above 90 since 2003. The latest result published earlier showed that Hong Kong attained the score of 91.83, a minor improvement over last year.

Turning now to mediation. Mediation is recently growing in popularity as a mode of dispute resolution in the shipping industry. There is no winning party or losing party. It preserves relationships and aims for a negotiated outcome that is agreed upon and beneficial to both sides, thereby creating a win-win situation.

The increase of maritime mediation is evidenced in the introduction of mediation clauses by maritime arbitral bodies. BIMCO has redrafted its Standard Dispute Resolution Clause and carved out the mediation part into a stand-alone Mediation Clause 2020, for parties' adoption into their contracts during negotiations. In addition, parties may incorporate mediation by adopting hybrid modes, including Arb-Med or Arb-Med-Arb. Mediation rules and procedures are also developed to facilitate mediation processes either within or associated with the arbitration processes.

Hong Kong is well positioned to provide mediation services to both local and foreign business, including the maritime industry. First, it is the long-term policy of the Government to promote and develop the wider use of mediation. Being aware of the importance of mediation as an alternative dispute resolution process, we initiated the "Mediate First" Pledge campaign in 2009 to encourage companies and organisations to make a statement of commitment to use mediation first in resolving disputes. The initiative is now extending to other jurisdictions, including Shanghai, Qianhai and Shenzhen, demonstrating our effort to promote and develop Hong Kong as an international mediation centre.

Hong Kong has a comprehensive regulatory framework for the conduct of mediation, including the Mediation Ordinance (Cap. 620) and the Apology Ordinance (Cap. 631). Hong Kong is the first jurisdiction in Asia to enact apology legislation, which promotes amicable settlement of disputes. Further, the Arbitration and Mediation Legislation (Third Party Funding) (Amendment) Ordinance 2017 provides that third party funding for arbitration and mediation is permitted under Hong Kong law.

With the strong strength of our legal sector and commercial men, they could be very competent mediators once they have acquired the necessary mediation skills, and provide professional mediation services to the industry. Indeed, given their daily experience in negotiations, they themselves may well be inherently a very good mediator already.

Whilst we are looking at arbitration and mediation in isolation, in Asia, it has been seeking to amalgamate them in various effective ways, such as Arb-Med or Med-Arb. Whereas the subject may not be covered today, I think it is incumbent upon me to share with you that under the Arbitration Ordinance (Cap. 609), we cater for such hybrid mechanisms. Among which, sections 32 and 33 of the Arbitration Ordinance provide that an arbitrator may act as a mediator if the parties consent in writing.

While the pandemic has stretched the technical needs of businesses over the tipping point, the process of evolving to deal with emerging technologies has been going on in the maritime world well in advance. The Department of Justice has long recognised the emerging new demands for online legal services and has from 2018 supported the development of the eBRAM platform, to provide an efficient, cost-effective and secure platform for online dealmaking and disputes resolution among parties from all over the world, offering services such as e-negotiation, e-mediation, e-arbitration and e-signing of ODR agreements by integrating the latest technology such as blockchain, smart contract and AI. As maritime trade often involves parties in different countries, the eBRAM platform may well offer cross-border one-stop dispute resolution services to maritime enterprises worldwide.

Coupled with our talents, unique strengths and inclusiveness of Hong Kong's arbitration and mediation regime as mentioned above, in particular the distinctive features of Hong Kong law, I am confident that Hong Kong will continue to play an important role in the provision of high value-added professional services to the global maritime industry.

Lastly, I would like to thank the co-organiser and other supporting organisations again for their contributions in maintaining and promoting Hong Kong's edge as a world-leading hub for international shipping and maritime services. I close by wishing you fruitful exchanges and discussions in the panels to come. Thank you very much. 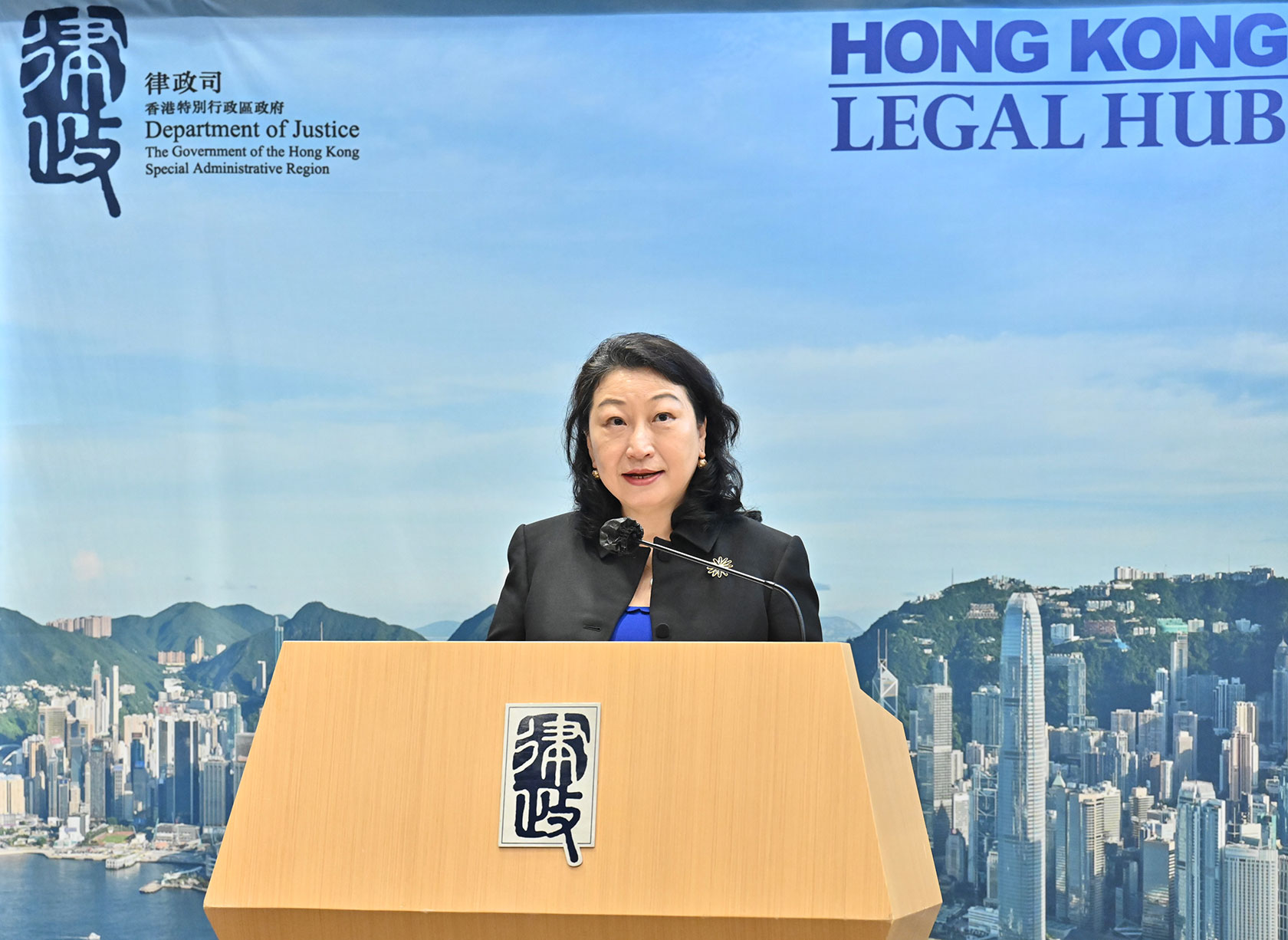