Following is the speech by the Deputy Secretary for Justice, Mr Cheung Kwok-kwan, at the 35th Anniversary Gala Dinner of School of Law of City University of Hong Kong today (September 24):

Good evening. It gives me great pleasure to join you tonight to celebrate the 35th Anniversary of the School of Law of the City University of Hong Kong, which is also my alma mater. As an alumnus, I would like to say a few words on the immense opportunities lying ahead for Hong Kong legal profession.

Underpinned by our robust legal system, Hong Kong has always been an international legal services and dispute resolution hub, with a diverse pool of legal talents. More importantly, Hong Kong has been enjoying the unique advantage under the principle of "one country, two systems".

Hong Kong is the only common law jurisdiction within our country. In President Xi's speech made on July 1, President Xi twice recognised that the common law system of Hong Kong is one of its irreplaceable edges. The central government fully supports Hong Kong in its effort to maintain the common law system, so as to expand and facilitate its exchanges with the world. Certainly the "common law system" encompasses not only legal rules or case precedents, but also our legal profession, our law schools which have nurtured so many generations of young legal talents. You have all contributed to this important achievement and will continue to play an integral part of Hong Kong's further development as an international legal services and dispute resolution centre.

As remarked by President Xi, "Hong Kong's close connection with the world market and strong support from the motherland are its distinctive advantages". We must maintain Hong Kong's distinctive status; and Hong Kong has all along been enjoying staunch national support.

For instance, the National 14th Five-Year Plan, as well as the Outline Development Plan for the Greater Bay Area explicitly support Hong Kong's development into a centre for international legal and dispute resolution services in the Asia-Pacific region. Coupled with other national development initiatives like the Belt and Road, there are immense opportunities for the legal and dispute resolution profession in Hong Kong.

We must grasp the opportunities proactively by enhancing the co-operation and collaboration between the two legal systems in the Mainland and Hong Kong. In this regard, it would be timely for me to highlight a few areas which might be of particular relevance for Hong Kong lawyers.

You might have heard about the GBA Legal Professional Examination (GBA Exam), which has been successfully held in the last couple of years. The GBA Exam facilitates the flow of legal talents within the GBA and enables qualified Hong Kong legal practitioners to provide legal services in the GBA on specified civil and commercial legal matters.

To enhance and facilitate the provision of legal services within the GBA by the relevant Hong Kong legal practitioners, the Department of Justice (DoJ) and the Supreme People's Court had also collaborated to provide practical training for those who have passed the GBA Exam, so as to enhance their practical knowledge on Mainland courts' handling of different areas of civil and commercial matters.

These Arrangements are working well and play an important role, especially the arrangement on mutual enforcement of arbitral awards. Not only does it enhance exchanges between the arbitration and legal sectors of the two jurisdictions, the arrangement also helps Hong Kong enhance its status as an international legal and dispute resolution centre in the Asia-Pacific region.

Indeed, upon the signing of the Arrangement on Interim Measures in Aid of Arbitral Proceedings between Mainland and Hong Kong in 2019, Hong Kong becomes the first jurisdiction outside the Mainland where, as a seat of arbitration, parties to arbitral proceedings administered by the six eligible arbitral institutions would be able to apply directly to the Mainland courts for interim measures.

For mediation, the three legal departments in the GBA Joint Conference, ie, Guangdong, Hong Kong and Macao, have agreed on common accreditation standards and code of conduct best practice of the GBA mediators. They are also actively exploring other collaborations in different aspects such as arbitration, capacity building, professional exchanges etc.

Law schools certainly play an important role in equipping the future generations of our legal community in grasping the immense opportunities brought by the national initiatives, in particular the GBA development and the Belt and Road Initiative.

To this end, the School of Law of the City University of Hong Kong has always been a pioneer in conducting research of Chinese and comparative law, providing high quality legal education of Chinese law, and offering joint programmes to train Chinese judges.

I also take this opportunity to congratulate the Public Law and Human Rights Forum of the School of Law which had successfully organised its first legal forum addressing the conflicts of law, legal co-operation and connection of rules within the GBA, while the same was met with overwhelming response.

The DoJ looks forward to collaborating with key stakeholders from the academic sector in providing comprehensive legal education, exchanges and capacity building activities to both law students and practitioners. I believe all of these initiatives will substantially enrich the capacities of both our law students and legal professionals, of Hong Kong as well as the Mainland.

Tonight we celebrate the 35th Anniversary of the School of Law. On this very special occasion, I would like to wish the Gala Dinner and other celebratory events fruitful and memorable. Thank you. 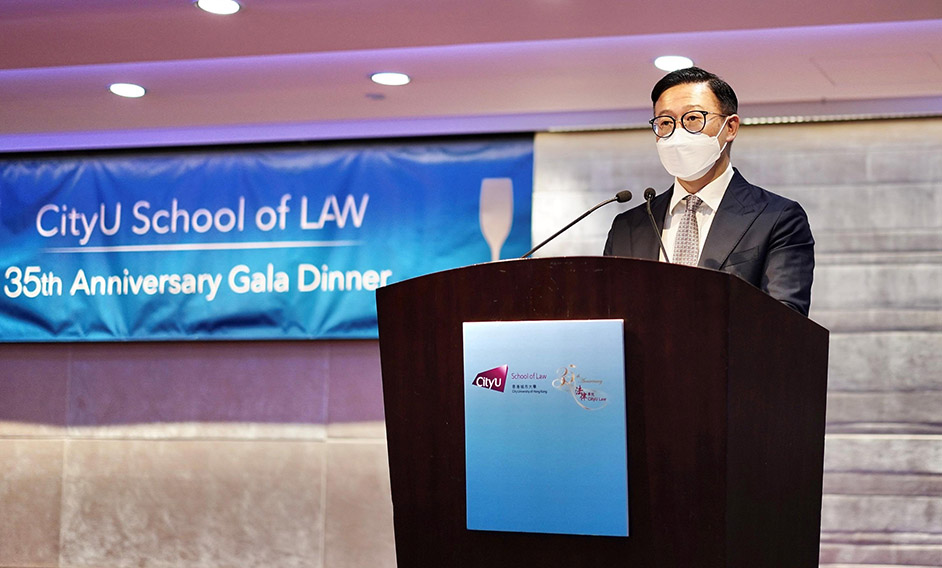