Following is the keynote speech by the Secretary for Justice, Mr Paul Lam, SC, at the 50th Anniversary Symposium of the Chartered Institute of Arbitrators (East Asia Branch) (CIArb (EAB)) "Evolving Landscape of Arbitration in Asia over the Past 50 Years and Beyond" today (November 16):

Good afternoon. I am delighted to be invited to join you in this symposium in celebration of the Golden Jubilee of the Chartered Institute of Arbitrators (East Asia Branch) to deliver the keynote speech. In the past 50 years, we have witnessed the steady development in international arbitration, with remarkable and accelerated growth in the Asia-Pacific region. Hong Kong clearly is one of the key players propelling such development by way of refining our legislative framework, enhancing capacity building, and striving to provide quality legal and dispute resolution services over the years. Hong Kong is now one of the leading legal and dispute resolution services centres in the Asia-Pacific region. I would like to take this opportunity to pay tribute to all of the pioneers in the legal and dispute resolution community in Hong Kong, in particular, the CIArb (EAB) for their past 50 years of dedication, hard work and sterling contributions.

The theme of today's symposium is "Evolving Landscape of Arbitration in Asia over the Past 50 Years and Beyond". Fifty years is more than just an important milestone. As we gather here today, let's perhaps take a brief moment to reflect on what we have achieved on this journey together and take a look at what lies ahead in terms of challenges and opportunities for arbitration in Asia in the years ahead.

The core building blocks for a healthy and sustainable development of arbitration include a sound and robust legislative framework, a pro-arbitration judiciary, and a supportive arbitral community. I am very proud to say that Hong Kong has done remarkably well in these areas, and we will continue to grow and build on these fundamental successful factors.

The now repealed Arbitration Ordinance (Cap. 341), enacted in 1963, mirrored the provisions in the English Arbitration Act 1950 and provided a unitary arbitration law regime applicable to both international and domestic arbitrations. In 1975, Cap. 341 was amended to give effect to the New York Convention to facilitate the enforcement of foreign arbitral awards in Hong Kong.

In 1990, Cap. 341 was amended, making Hong Kong the first jurisdiction in Asia to adopt the UNCITRAL Model Law for international arbitrations (Note 3). In 2011, the ordinance was repealed and replaced by the present AO which unified the regime for international and domestic arbitrations and introduced several features to enhance Hong Kong's attractiveness as a seat for arbitration and minimised judicial intervention.

More recently, in 2017, the AO was refined to clarify that disputes over intellectual property (IP) rights are arbitrable, with a view to facilitating parties to resolve their disputes on IP rights through arbitration in Hong Kong. In the same year, the AO was amended to allow third party funding in arbitration in Hong Kong, providing access to justice for under-resourced parties with funding support from third party funders.

Another breakthrough is the recent introduction of the outcome related fee structures for arbitration (ORFSA) with the new Part 10B under the AO enacted quite recently in June this year. The ORFSA provides clients and their lawyers with the flexibility to agree on the arrangements of legal fees payable based on the outcome in the arbitration. In fact, other major arbitral seats, including Mainland China, England and Wales and Singapore have already put in place some form of fee arrangements for arbitration. Hong Kong has taken a bigger and more significant step by allowing three types of ORFSA agreements, namely (a) conditional fee agreements, (b) damages-based agreements and (c) hybrid damages-based agreements, providing a wider scope of options to cater for the needs of different users.

The Arbitration (Outcome Related Fee Structures for Arbitration) Rules (ORFSA Rules) which set out the minimum safeguards for ORFSA agreements were already tabled before the Legislative Council for negative vetting. We are hopeful that the operative sections of the new Part 10B together with the ORFSA Rules will be fully implemented in Hong Kong next month by December.

History shows that Hong Kong has always been at the forefront of arbitration development. We constantly review our legislative framework to keep up with the latest best practices in international arbitration and actively respond to the needs of the arbitration parties in order to maintain Hong Kong's competitiveness as a leading arbitration centre in the Asia-Pacific region and beyond.

Another paramount factor for parties when choosing the seat of arbitration is the attitude of the courts which have a direct and vital role in arbitration. In Hong Kong, we have an independent judiciary free from any influence, and the Hong Kong courts adopt a pro-arbitration approach with minimal intervention. This is and will surely remain one of the key attributes that underpins Hong Kong as one of the top arbitral seats in the Asia-Pacific region.

In a speech (Note 4) last year, the Hon Chief Justice Andrew Cheung reiterated the pro-arbitration policy of the Judiciary: "(1) [T]he duty of the courts to stay court proceedings in favour of arbitration; (2) [T]he power of the courts to support arbitral proceedings where this is necessary in the public interest; (3) [T]he limited circumstances in which an award may be set aside by the courts; and (4) [T]he presumption that leave to enforce an award should be granted." The practice of the pro-arbitration stance of the Hong Kong Judiciary is in fact well documented in the court judgments.

In addition to an up-to-date legislative framework and a supportive judiciary, Hong Kong's arbitration development has benefitted enormously from the presence and contributions of many vibrant arbitration institutions in Hong Kong.

Back in the 1980s, a steering committee was set up by the Government to develop Hong Kong as an international arbitration centre. With the concerted efforts from the private sector and the Government, the Hong Kong International Arbitration Centre (HKIAC) opened its doors to the world in September 1985. We have seen tremendous growth in the number of arbitration cases submitted to the HKIAC from 20 cases in 1986 to 514 cases in 2021. Since 2015, Hong Kong has been voted as one of the top five preferred seats for arbitration globally according to the International Arbitration Surveys conducted by Queen Mary University of London. The total disputed amount of all arbitration cases handled by the HKIAC in 2021 also reached a staggering sum of US$7 billion. (Note 5)

With the support from the Central People's Government, Hong Kong has also attracted international and regional arbitration centres to set up their regional offices in Hong Kong over the years. In May this year, the sixth regional arbitration centre of the Asian-African Legal Consultative Organization was established in Hong Kong. More recently, Hong Kong was chosen to be the place to set up the International Organization for Mediation Preparatory Office in order to organise the negotiation of the relevant international convention and the preparatory work relating to the establishment of this organisation. These developments signify a vote of confidence by our counterparts in Hong Kong's continuing role as a leading centre for international legal and dispute resolution services in the Asia-Pacific region.

The COVID-19 pandemic was a catalyst for lawtech and expedited the development of online dispute resolution (ODR) services. Set up in 2018, eBRAM International Online Dispute Resolution Centre is Hong Kong's homegrown service provider of ODR. In May 2022, it was officially listed by the Asia-Pacific Economic Cooperation (APEC) as one of the very first batch of online dispute resolution service providers under the APEC Collaborative Framework for Online Dispute Resolution of Cross-Border Business-to-Business Disputes. Last month on October 24, eBRAM has officially launched its online arbitration and online mediation platforms, and plans to introduce an online deal-making platform towards the end of the year. These new developments add to the existing dispute resolution services available in Hong Kong, offering users with a wider range of secure, cost-effective services and further strengthens Hong Kong's position as an international hub for legal, deal making and dispute resolution services.

Strengths and uniqueness of Hong Kong

Under the principle of "one country, two systems", Hong Kong exercises a high degree of autonomy. Hong Kong is the only common law jurisdiction within China, with both Chinese and English being our official languages. Coupled with our independent judiciary, which is always a vital and integral part of Hong Kong's legal system, Hong Kong provides a certain and predictable legal environment conducive to resolving international and cross-border disputes. As echoed in the Chief Executive's Policy Address this year, the HKSAR Government will continue to leverage on the advantages of our common law system to consolidate our strengths as an international legal and dispute resolution services centre.

Another notable strength of Hong Kong is the deep and diverse pool of legal and dispute resolution talents. In the legal sector, we have over 1 600 practising barristers (Note 6), over 11 000 practising solicitors (Note 7), more than 80 foreign law firms (Note 8) and 1 400 registered foreign lawyers (Note 9). We also welcome foreign talents with diverse backgrounds and experience to arbitrate in Hong Kong. According to the HKIAC, in 2021, approximately 60 per cent of the arbitrators appointed by the HKIAC, and 62 per cent of the arbitrators designated by parties or co-arbitrators and confirmed by the HKIAC, were neither Hong Kong residents nor dual nationals. (Note 10)

Riding on the strengths of Hong Kong's legal and dispute resolution services, the Department of Justice (DoJ)'s annual flagship event, Hong Kong Legal Week 2022, was our starting point to develop an overall promotion strategy. The various events held throughout last week, including those co-organised with the "three sister" organisations of private international law – UNIDROIT (International Institute for the Unification of Private Law), HCCH (Hague Conference on Private International Law) and UNCITRAL (United Nations Commission on International Trade Law), successfully attracted over 8 000 local and overseas participants in person and online. I do remember seeing some of you over the events held last week.

Another exciting event to look forward to is the biennial 26th International Council for Commercial Arbitration Congress (ICCA Congress) which will be held in Hong Kong from May 5 to 8, 2024. The DoJ will fully support the organisation of the ICCA Congress to promote and consolidate Hong Kong's leading position as an international legal and dispute resolution services centre in the Asia-Pacific region and beyond.

Ladies and gentlemen, 50 years is an incredible journey for you and your predecessors. Looking around, I can see the energy, the passion and sense of pride radiating from each of you. The success of CIArb (EAB) in the past five decades can also be characterised as part of Hong Kong's good and successful story. I congratulate you sincerely on your 50th anniversary and wish you continued success in the next 50 years and beyond. Thank you. 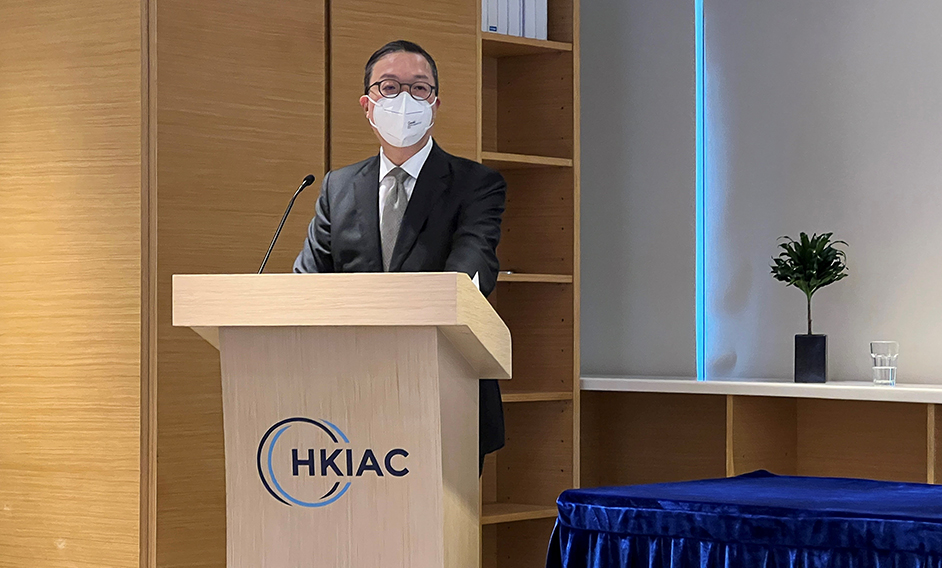