Following is the speech by the Secretary for Justice, Mr Paul Lam, SC, at an international law conference on "one country, two systems" and the Belt and Road Initiative organised by the Hong Kong Basic Law Education Association today (December 3):

Good afternoon. Firstly, I would like to thank Dr Priscilla Leung, Chairman of the Hong Kong Basic Law Education Association for organising this important international law conference. I think it gives all of us an opportunity to discuss building partnerships, as well as the role that Hong Kong can play, in taking forward the Belt and Road Initiative.

Now seeing that the theme of today's conference is the practice of "one country, two systems", I wish to highlight one major feature of this innovative policy, and that is the common law system of Hong Kong. The importance of Hong Kong's common law was reiterated by President Xi in his address at the meeting celebrating the 25th anniversary of Hong Kong's return to the motherland in July this year, he noted that "[t]he central government fully supports Hong Kong in its effort to maintain its distinctive status and edges, … and to maintain the common law…"

Indeed, the preservation of the common law in Hong Kong since its return to the motherland is explicitly provided by Article 8 of the Basic Law, which states that the laws previously in force in Hong Kong, including the common law, shall be maintained.

Hong Kong's common law system has its own unique characteristics. At the outset, Hong Kong adopts a bilingual common law system, with Article 9 of the Basic Law providing that both Chinese and English as the official languages that can be used by, inter alia, the judiciary. As common law was developed in the English language to begin with, the courts being able to use it as an official language is conducive to the continuation of the development of the common law in Hong Kong. We may also appreciate that English is the lingua franca of the global business community and its use in Hong Kong as an official language also facilitates business both in and through Hong Kong.

Another notable strength of the common law system lies in judicial independence. Our courts exercise independent power of adjudication free from any interference, which is guaranteed under the Basic Law in Articles 2, 19 and 85. Article 85 also allows our Court of Final Appeal to invite eminent foreign judges to sit as Non-Permanent Judges, and the Judgements of our Court of Final Appeal have been cited by other common law jurisdictions from time to time. Similarly, Article 84 of the Basic Law allows Hong Kong Courts to refer to judicial precedents of other common law jurisdictions.

These features contribute to imbuing Hong Kong's common law with international characteristics. Our common law also has a very strong heritage and enjoys an excellent reputation in the global community, ranking 22nd out of 140 countries and jurisdictions worldwide in the most recent 2022 World Justice Project Rule of Law Index, which is highly comparable, if not better than, many other common law jurisdictions.

The international nature of Hong Kong's common law is evident from the presence of a very strong pool of local and foreign legal professionals. As of October this year we are home to 81 registered foreign law firms from 22 jurisdictions, and 1 438 registered foreign lawyers from 33 jurisdictions, as well as 934 Hong Kong law firms and 11 375 practising solicitors. Coupled with over 1 600 practising barristers including over 100 Senior Counsels, a great majority of our legal profession are fluent in both Chinese and English, and is conversant in both western and Chinese business practices.

Being the only common law jurisdiction in China, Hong Kong has a uniquely important role to play in the Belt and Road Initiative. In this connection, we should also take into account the National 14th Five-Year Plan, which affirmed the maintenance of Hong Kong's distinctive status and advantages, and explicitly supports Hong Kong's development into a centre for international legal and dispute resolution services in the Asia-Pacific region, adding to Hong Kong's strengths as a deal making hub. Notably, Hong Kong has been ranked as the world's top IPO venue in seven of the past 13 years.

Hong Kong's common law system can contribute to the Belt and Road Initiative in the role as a "super connector" or "super facilitator" by linking the Mainland, a civil law jurisdiction, with the global community by various means.

In cross-boundary civil and commercial matters, foreign companies wishing to establish a joint venture with Mainland companies and enterprises may establish their offices in Hong Kong and be governed by Hong Kong's legal and regulatory regime, which is compatible with international standards and practice. Contracting parties may choose Hong Kong law to be the applicable law and the place where disputes are to be resolved. The use of Hong Kong law and its legal and regulatory regime would no doubt increase the attractiveness and acceptability to foreign entities who may be more familiar with the legal principles rooted in the common law.

Our strength also lies in the breadth and depth of the mutual legal assistance framework established between the Mainland and Hong Kong, which is made possible by Article 95 of the Basic Law. This includes the bundle of arrangements with the Mainland regarding reciprocal enforcement and recognition of judgments over a wide range of civil and commercial matters, including intellectual property rights. The features of the most current arrangement which has been recently enacted into legislation includes removing the requirement of exclusive jurisdiction as a precondition for recognition and enforcement, enhancing certainty and predictability and at the same time reducing risks, legal costs, and time associated with cross-boundary enforcement of judgments. Another arrangement entered with the Mainland allows parties to arbitral proceedings seated in Hong Kong and administered by designated arbitral institutions to apply to the Mainland courts for interim measures, including property preservation, evidence preservation and conduct preservation.

The recent 20th National Congress of the Communist Party of China expressly mentioned "one country, two systems" is to be fully, faithfully and resolutely implemented, it also reiterated that it will "give full play to the strengths and distinctive features of [Hong Kong] to see [it] consolidate and elevate their international position in finance, trade, shipping, aviation, innovation and technology, culture and tourism, and other fields." This is a major confidence booster to both the fact that Hong Kong's common law system will long continue, and to the support and confidence of the Central People's Government to Hong Kong. Indeed, the recent announcement to establish in Hong Kong the Preparatory Office of the International Organization for Mediation, an international organisation which aims to provide friendly, flexible, economical and efficient mediation services for international disputes, is the best evidence of the confidence and support given by the central authority. I am very confident that Hong Kong, with its unique common law system, will play a vital role in our country's national development initiatives, in particular in the Belt and Road Initiative.

On this note, I hope you enjoy the rest of the conference with its most insightful discussions. Thank you very much. 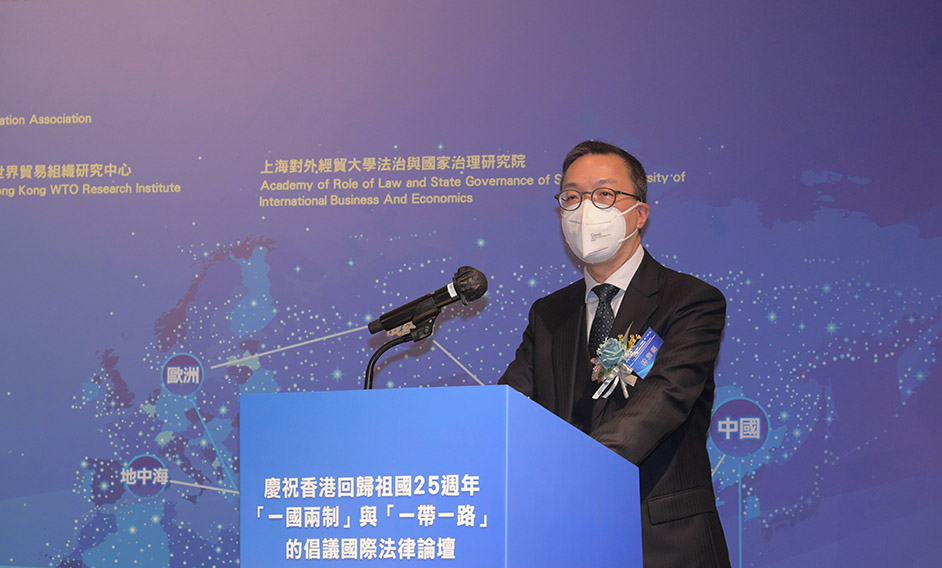