Following is the speech by the Secretary for Justice, Mr Paul Lam, SC, at the 2022 Colloquium on International Law: The Global Climate Crisis: Finding Common Ground through International Law today (December 6):

We are deeply saddened by the passing of our late President Jiang, whose memorial was held earlier today at the Great Hall of the People in Beijing. President Jiang was far-sighted, and his death is an inestimable loss to all of us.

President Jiang will be remembered for his service and dedication to the people. We will turn grief into strength, and work towards a better future for China and the world.

Today's Colloquium is our concerted efforts in addressing a timely and pressing issue - climate change - for the better future of the world. I extend my gratitude to the Asian Academy of International Law (AAIL), AAIL Foundation, and the Chinese Society of International Law for organising this event.

"Climate Change is the defining issue of our time and we are at a defining moment." This quote on the webpage of the United Nations (UN) has aptly summarised where we stand on the subject of climate change at this point of time. From heatwave to mega-drought and flooding, hurricane to species loss and famine, we are witnessing the impacts of climate change on a global scale.

(I) Challenge of Our Time

Science teaches us that we have entered into the Anthropocene, a new geological age in which humanity becomes the driving force in changing our Mother Earth, with huge and even disruptive impact on life. This epochal human impact is well recognised in the reports by the UN Intergovernmental Panel on Climate Change (IPCC) and UN Intergovernmental Science-Policy Platform on Biodiversity and Ecosystem Services (IPBES).

IPCC estimates that human activities have caused about 1.0 degree Celsius of global warming above pre-industrial levels. Global warming is likely to reach 1.5 degrees C between 2030 and 2052 if it continues to increase at the current rate. According to the IPBES, humankind has altered the nature more than ever before, with an average of around 25 per cent of animal and plant groups, or around 1 million species, being threatened.

Science also gives us a chance for relief. IPCC projects that limit global warming to 1.5 degrees C, by reaching net zero of global net emission around 2050, would reduce risks to marine biodiversity, fisheries and the ecosystem. IPBES reports that nature can be conserved, restored and used sustainably through urgent and concerted efforts fostering transformative change.

The environmental challenges and impacts mentioned above are transboundary in nature. States have an early recognition that international co-operation through appropriate legal frameworks is indispensable to effective worldwide responses. The world has to stand together and come up with a global transformative response. While it would require the concerted efforts of both developed and developing countries and their relevant sectors to address this "common concern of humankind", international law is undoubtedly a critical tool in this transformation, and we all have a key role to play.

Principle 27 of the Rio Declaration on Environment and Development, produced at the 1992 Earth Summit, requires states and people to co-operate in good faith and in a spirit of partnership towards the fulfilment of conservation, protection and restoration of the integrity of the Earth's ecosystem. This principle of global partnership facilitates the development and evolution of treaties, commonly referred to as multilateral environmental agreements or MEAs, which are the dominant sources of international environmental law. The body of MEAs is vast, covering not only directly climate change and the atmosphere but also more broadly the hydrosphere and biosphere, as well as hazardous substances and activities.

On climate change, the UN Framework Convention on Climate Change (UNFCCC) sets out the basic legal framework for international co-operation to tackle the challenge. UNFCCC aims to stabilise atmospheric concentrations of greenhouse gases (GHGs) at a level that would prevent "dangerous anthropogenic interference with the climate system". The 1997 Kyoto Protocol was adopted to strengthen the commitment of relevant parties and to supplement the Convention. This framework is buttressed by the ozone regime under the Montreal Protocol on Substances that Deplete the Ozone Layer, and other relevant sector-specific treaties like the International Convention for the Prevention of Pollution from Ships.

The Paris Agreement aims at holding the increase in global average temperatures to well below 2 degrees C above pre-industrial levels and pursuing efforts to limit the temperature increase to 1.5 degrees C, thereby specifying the ultimate objective of UNFCCC in measureable temperature terms. The Agreement is transformative in requiring global emissions to peak as soon as possible, enjoining states to achieve climate neutrality by the second half of this century, and establishing the goal of enhancing adaptive capacity.

With a fundamental change of approach from prescriptive internationally negotiated targets for developed countries in the early climatic regime, the Paris Agreement requires states to establish a nationally determined contribution, or NDC. An NDC is a climate action plan to cut emissions and adapt to climate impacts. It enables states to freely select the policies and what they intend to achieve. It also reflects equity and builds on the UNFCCC principle of "common but differentiated responsibilities and respective capabilities" for implementation under the Paris Agreement "in light of different national circumstances". States are also required to revisit and strengthen the targets in their NDCs every five years. Building on each other over time, NDCs ensure a liveable and equitable future for everyone in the world.

(III) Alignment with Our Country

China attaches great importance in our response to climate change, and has contributed to global unity on climate governance. In 2015, President Xi gave a keynote speech at the Paris Conference on Climate Change, making a historic contribution to the conclusion of the Paris Agreement. In 2016, President Xi deposited in person the legal instrument of China's ratification of the Paris Agreement, indicating China's strong resolution in tackling climate change.

Most recently in October this year, President Xi mentioned, in his report to the 20th National Congress of the Communist Party of China, that China is working actively and prudently toward the goals of reaching peak carbon emissions and carbon neutrality. To this end, we will, among other things, transition gradually toward controlling both the amount and intensity of carbon emissions, as well as promote clean, low-carbon, and high-efficiency energy use.

To align with our country's commitment to reach peak carbon emissions before 2030 and carbon neutrality before 2060, the HKSAR Government has set its own targets. In particular, the HKSAR Government released in 2021 the Climate Action Plan 2050 setting the vision of "Zero-carbon Emissions‧Liveable City‧Sustainable Development", with the goal of achieving carbon neutrality before 2050.

To reduce the total carbon emissions by half before 2035, using the 2005 level as the baseline, our Chief Executive announced in his 2022 Policy Address to step up decarbonisation efforts. We will conserve energy, promote green transport and waste reduction in the community. The Council for Sustainable Development will be re-organised, becoming the new Council for Carbon Neutrality and Sustainable Development to offer advice on decarbonisation strategies.

We have spared no efforts in the implementation of various MEAs through our robust and multi-pronged domestic environmental legislation, spanning over all the aforementioned planetary spheres.

The Paris Agreement recognises the importance of all ecosystems and the protection of biodiversity. Among the three Rio Conventions - on Biodiversity, Climate Change and Desertification - that derive directly from the 1992 Earth Summit, the Convention on Biological Diversity (CBD) and its Cartagena Protocol have also been extended to Hong Kong. We are proud that Hong Kong's existing nature conservation policy and measures are generally in line with the objectives of the CBD and its Cartagena Protocol.

Apart from the conservation of species, we should not lose sight of habitat protection either. The main international legal framework for protection of habitat is laid down by the Convention on Wetlands of International Importance especially as Waterfowl Habitat, or the Ramsar Convention. The Ramsar Convention entered into force for China in 1992. Currently, our country has 64 sites designated under the Convention as Wetlands of International Importance, covering over 7.3 million hectares of area. We are honoured that Hong Kong's Mai Po Marshes and Inner Deep Bay is the 7th Ramsar Site of our country. It is another testimony to our joint efforts with the country in natural conservation and sustainable development.

We will keep up with the international obligations under various MEAs, and will continue our efforts in alignment with our country's commitment to tackle climate change and its adverse impact.

On this note, I wish you all very fruitful discussions at this Colloquium. Thank you. 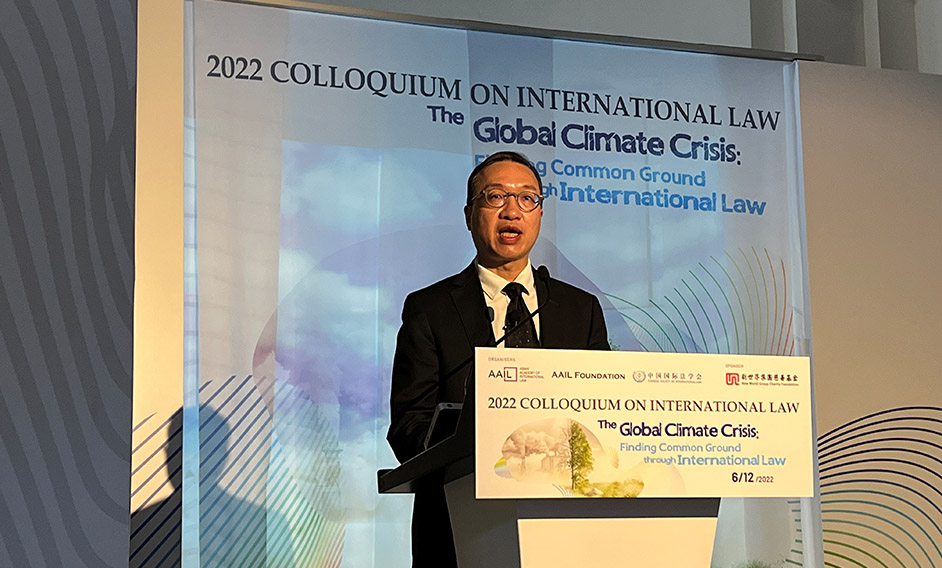 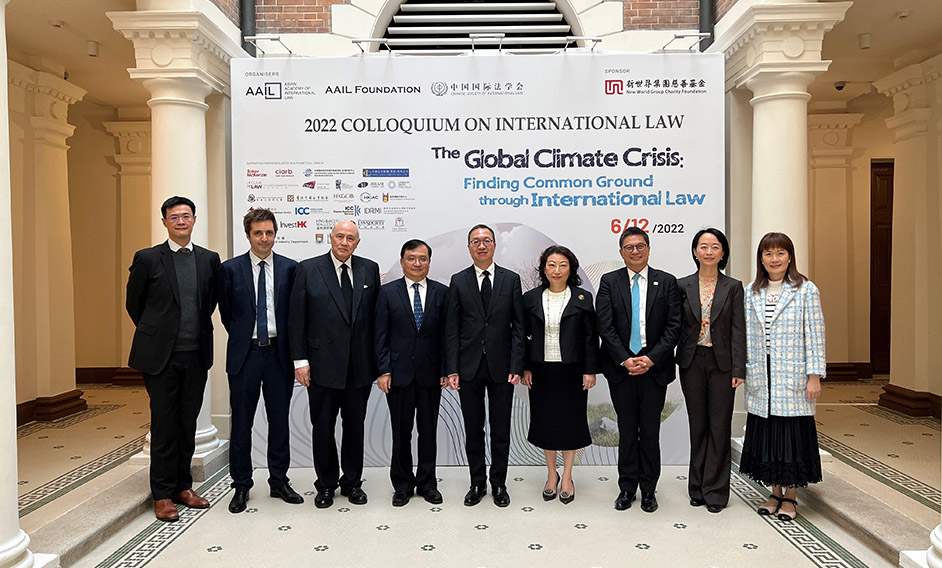