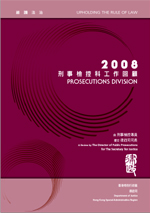 The Yearly Review of the Prosecutions Division 2008 was released on 23 April 2009. This is the eleventh Yearly Review of the Prosecutions Division since 1997. Through this, we describe the activities of a prosecution service which placed a premium upon reform throughout 2008, both as a means of modernising itself and of improving the quality of criminal justice. Our core business was the effective prosecution of crime, and close liaison was maintained with our criminal justice partners and prosecutors elsewhere in the development of anti-crime strategies. We applied prosecution policy fairly and firmly in the best interests of the community we serve.

In his statement at the media briefing held on 23 April 2009, Mr I Grenville Cross, SC, Director of Public Prosecutions, said:-

Today we report to the public upon the work of the Prosecutions Division of the Department of Justice in 2008, which was an eventful year for our prosecutors. We strengthened our capacity to prosecute all types of crime, and prosecutions were fairly and effectively conducted. The quality of justice available to victims and witnesses was enhanced, and the interests of those accused of crime were safeguarded. Close collaboration with local law enforcers was pursued, and liaison with prosecutors elsewhere yielded positive results. Criminal justice reform was accorded a high priority, and in key areas our processes were modernised. Transparency was embraced, and we engaged with the community in all areas.

Copies of the Yearly Review can be obtained from the Reception Counter of the Prosecutions Division on 5/F, High Block, Queensway Government Offices, 66 Queensway, Hong Kong.

Some of the files are in PDF format. Please download Adobe Acrobat Reader for viewing.