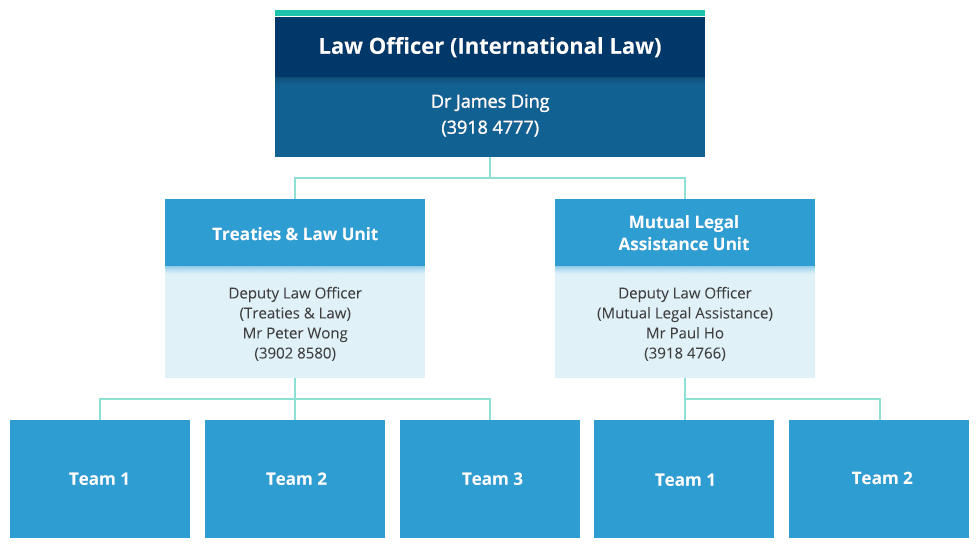 The subjects on which the Treaties & Law Unit gives advice include international trade law, privileges and immunities, civil aviation and maritime matters, international labour conventions, human rights, environment and health, visa abolition and outer space. The unit also advises on the drafting and interpretation of co-operative agreements and arrangements which range from customs and police co-operation to cultural and education co-operation. The Mutual Legal Assistance Unit also performs an advisory role in relation to aspects of international criminal law and international legal co-operation in criminal matters. In addition, the division advises on the enactment of legislation to implement international agreements in the HKSAR. The subject matter includes United Nations Security Council Resolutions, maritime matters, conservation, surrender of fugitive offenders and mutual legal assistance in criminal matters.

Counsel in the division negotiate agreements on behalf of the HKSAR with foreign countries on the surrender of fugitive offenders, mutual legal assistance in criminal matters and the transfer of sentenced persons. The HKSAR has signed over 60 agreements on these three areas.

Apart from conducting negotiations, counsel in the division also provide legal support in bilateral negotiations as part of the HKSAR delegation. The subject matter of negotiations includes air services, avoidance of double taxation, customs co-operation, free trade agreements, agreements on investment promotion and protection and visa abolition. The number of these bilateral agreements to which the HKSAR is a party has been over 180.

These agreements provide for the rendering of assistance in relation to the investigation and prosecution of crimes, and proceedings related to criminal matters. The types of assistance include taking of evidence, executing requests for search and seizure, producing documents, restraining and confiscating proceeds of crime, transferring persons to give assistance and effecting service of legal process.

The parties to an agreement for the surrender of fugitive offenders undertake to surrender to each other, subject to conditions, persons who are accused of serious offences, or who have absconded after conviction. The conduct constituting the crime must amount to an offence according to the laws of both parties. These agreements help to prevent the HKSAR from becoming a haven for criminals from abroad and facilitate the return to the HKSAR of criminals who have fled overseas.

These agreements enable foreign nationals serving a sentence of imprisonment in the HKSAR to return to their home country so as to serve out the remainder of their sentence in an environment which is free from cultural and language barriers and where they will be able to receive family support. Similarly, people from the HKSAR who are serving sentences of imprisonment imposed in foreign jurisdictions may return to the HKSAR to serve the balance of their sentences in a familiar environment and thereby enhance their prospects of rehabilitation.

An investment promotion and protection agreement creates favourable conditions for greater investment by investors of one contracting party in the area of the other. Such an agreement includes provision for the investments of each party to be accorded fair and equitable treatment with no discrimination, and for compensation to be paid for losses caused by war or other armed conflict, revolution, national emergency or riot; and for deprivation of investments. Currently, the HKSAR has signed around 20 investment promotion and protection agreements with other jurisdictions.

Very often these meetings and conferences discuss the drafting and conclusion of multilateral agreements or matters arising from their implementation. Currently, over 260 multilateral treaties apply to the HKSAR.

The Mutual Legal Assistance Unit discharges the responsibilities of the Central Authority of the HKSAR for the purposes of mutual legal co-operation in criminal matters. The unit co-ordinates and processes requests to and from the HKSAR for the surrender of fugitive offenders and for mutual legal assistance; and advises the government on applications for the transfer of sentenced persons to and from the HKSAR. The unit also handles letters of requests from overseas courts or tribunals pursuant to the Evidence Ordinance (Cap. 8). On the authorization of the Secretary for Justice, the unit acts as the Central Authority of the HKSAR under the Hague Convention on the Civil Aspects of International Child Abduction and processes return and access applications to and from Convention countries in accordance with the Child Abduction and Custody Ordinance (Cap. 512). Details regarding the Convention and the related operation regime in the HKSAR are available from this link .

For information of obtaining assistance from HKSAR in criminal cases, please refer to Guidelines for Making Applications under the Mutual Legal Assistance in Criminal Matters Ordinance (Chapter 525, Laws of Hong Kong) and Guide to Asset Recovery in the Hong Kong Special Administrative Region.

The Mutual Legal Assistance Unit provides legal support to the Financial Secretary and Secretary for Security in relation to the HKSAR’s participation in the FATF as a full member, under the name “Hong Kong, China”. Counsel attend international meetings of the FATF, participate in expert working groups and act as expert legal assessors in mutual evaluations of fellow members’ implementation of measures to combat money laundering and terrorist financing.